Social media, as the term implies, was initially a platform for exchange and entertainment. With the rise of digital advertising tools in marketing, experts are pushing investments in the field of social media, taking advantage of the direct communication between a brand and a potential buyer. In 2018, digital advertising revenue in France amounted to 5.5 billion U.S. dollars, which was the third highest value in Europe. Investments in social media ads saw a growth of around 21 percent from 2018 to 2019, reaching 1.4 billion euros. Marketers have recognized the potential selling value of the platforms, as well as the means to network between companies.

Brands and businesses on social media

Being the worldwide social media leader in 2019, Facebook generated close to 69.66 billion U.S. dollars in advertising revenue. Instagram and Twitter were also popular amongst marketers, with respectively 51 percent and 22 percent using these platforms. Making up a large portion of the total percentage of companies using social media in 2019, the industries with the strongest social media presence would be information and communication. As a key marketing objective, most list the development of the enterprise's image, marketing products and increasing visibility. Marketers in particular turn to social media advertising to increase their audience engagement and brand awareness, as well as generating leads and sending traffic to the company website. Nevertheless, the crucial difference to other marketing channels remains the communication part, which is changing rapidly. In 2018, 78 percent of social interaction was considered to be direct and personal, but it is becoming increasingly commercial, as reported in 2020. For daily B2B business, where communication is commercial per se, the most effective social media channel remained LinkedIn.

Marketers have recognized a way to send traffic to their website by partnering up with social media influencers, known for generating high engagement rates. In France, about 70 percent of French influencers included their Instagram in the list of networks receiving the most requests for partnerships with brands in 2018. However, while Instagram remains at the top in terms of engagement, TikTok has won the challenge in 2020 with an engagement rate of 20.45 percent for nano influencers (having between 1,000 and 10,000 followers on social media). It is therefore not surprising that the French themselves feel that certain influencers or advertisements have an impact on their purchasing behavior. Especially young French millennials are the biggest user group for platforms such as TikTok, giving marketers an opportunity to target that specific group.
For private individuals, around 20 percent of people declared that influencers had helped them discover new brands and products on a regular basis, with a preference for Facebook as a social shopping platform. As a consequence, about 47 percent of the French population is annoyed with online ads.
This text provides general information. Statista assumes no liability for the information given being complete or correct. Due to varying update cycles, statistics can display more up-to-date data than referenced in the text.
Published by Statista Research Department, Jan 6, 2023

Digital advertising revenue in selected regions and countries in Europe 2021

Overview of the digital advertising market 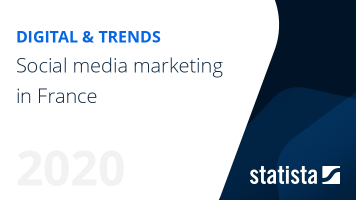 The most important key figures provide you with a compact summary of the topic of "Social media advertising and marketing in France" and take you straight to the corresponding statistics.