3D technologies, in both the digital and physical environments, are playing a more significant role in society than ever before. Advancements in software and equipment are opening up new possibilities in the augmented reality and virtual reality (AR/VR) space, from on-the-job training to trauma counseling. 3D printers, devices that create 3D objects based on a digital file, are now so accessible that consumers can pick up a printer and start manufacturing small items at home.

3D media works by giving the illusion of depth by presenting offset images separately to each eye. The human brain then combines these images to form a 3D image. Techniques for achieving this include glasses to combine two images, glasses that filter offset images from a single source, or having the light source split so that each eye sees a different offset image. As an example, these techniques have been used in cinemas, with the technology evident in some form within the film industry since 1915. As of 2020, there were over 122 thousand digital 3D cinema screens worldwide.

Another technology being used to recreate a visual appearance in 3D is by AR and VR devices. VR creates an environment that is entirely artificial (virtual), whereas AR uses the existing environment as a base to overlay new information on top of it. In both AR and VR, the information or imagery is made available to the user using headsets. Major companies are investing in extended reality (XR) technology, an emerging term for all immersive technologies, including AR, VR, and mixed reality (MR). Furthermore, regarded as the next iteration of the internet, the metaverse is where the physical and digital worlds will come together using VR headsets, AR glasses, smartphone apps, or other devices.

In addition to 3D cinema and 3D devices, the early 2010s saw the emergence of additive manufacturing and the rise of 3D printing. Some of the leading sectors that employ additive manufacturing systems include the aerospace, automotive, consumer goods, and medical industries. The global coronavirus (COVID-19) pandemic saw 3D printing technology used to produce medical supplies, including face shields, masks, respirators, and test swabs for COVID-19 test kits. The 3D printing market continues to grow and is projected to reach a value of around 17.4 billion U.S. dollars by 2022, reaching 37.2 billion U.S. dollars by 2026.
This text provides general information. Statista assumes no liability for the information given being complete or correct. Due to varying update cycles, statistics can display more up-to-date data than referenced in the text.

Thomas Alsop
Research expert covering the global hardware industry
Get in touch with us now
Published by Thomas Alsop, Mar 22, 2022 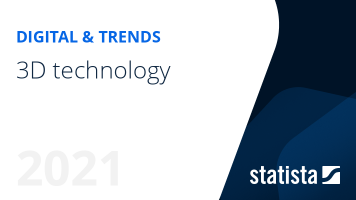 The most important key figures provide you with a compact summary of the topic of "3D technology" and take you straight to the corresponding statistics.