Biofuels are a biomass-derived type of alternative motor fuel. They may be used unblended for engines operating on pure biofuels or combined with refined petroleum for usage in regular diesel engines. Biodiesel is the most consumed biofuel type in the European Union and may be further differentiated into FAME – fatty acid methyl ester – and HVO – hydrotreated vegetable oil. Other biofuel types are ethanol and biogas.

Although the idea of using vegetable and cooking oils in engines predates the 21st century, marketable production only began taking off after 2000. With governments and leaders in the transportation industry looking to reduce reliance on petroleum-based fuels, biofuel production in the EU grew to some 660 petajoules by 2020. Germany, the largest car market on the continent, is also the leading biofuel producer in Europe, with an output of 146.3 petajoules that same year. Common feedstocks include crops such as sugar beet, corn, and canola, as well as used cooking oils and animal fats. Neste is the leading HVO biodiesel producer by capacity in Europe. As of 2020, the Finland-based company had an installed capacity of 1.53 million tons per year across two plants in Rotterdam, Netherlands, and Porvoo, Finland.

An estimated 15.8 million metric tons of oil equivalent biofuel are consumed in the EU every year. Despite a decline in 2020, due to lockdown measures and mobility restrictions following the coronavirus pandemic, the use of this alternative motor fuel has generally increased across all three fuel types.
In order to meet consumer demand, many European countries are reliant on imports. The import value of biodiesel in Europe climbed to a peak of over 15.5 billion U.S. dollars in 2020. This figure includes inter-European imports. This growth is also reflected in EU fuel ethanol imports, which were expected to reach 1.85 billion liters in 2021.
This text provides general information. Statista assumes no liability for the information given being complete or correct. Due to varying update cycles, statistics can display more up-to-date data than referenced in the text.
Published by Statista Research Department, Jan 31, 2023

Biofuel production in Europe 2021, by country

Biofuels consumption for transport in the European Union 2015-2020 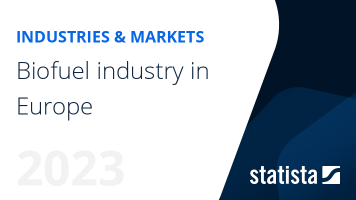 The most important key figures provide you with a compact summary of the topic of "Biofuel industry in Europe" and take you straight to the corresponding statistics.