There are multiple ways to measure an industry's performance. One is to look at sales from the manufacture of beer in the UK, which came to 3.4 billion British pounds. The turnover mentioned above was generated with over 24 thousand barrels of beer sold. Due to lockdowns and a sharp drop in demand production of beer in the UK dropped substantially in 2020, before rebounding in 2021.

In terms of trade, UK beer imports totaled 483 million GBP in 2020, a small decrease compared to 2020. The Netherlands was the single biggest trade partner in terms of beer imports. The pandemic coupled with Brexit took their toll on UK beer exports, totaling just 401 million GBP in 2020, the lowest level in over a decade. Exports grew only slightly in 2021. Europe was the largest trading partner for beer exports in 2021.

Adding imported beer cleared for consumption to the amount of UK produced beer totaled 46 million hectoliters approved for consumption in 2021, a turnaround after 2020's steep decline. On an individual level, 73 liters of beer were consumed per capita on average. The most popular type of beer in the UK was India pale ale, followed by pale ale. In terms of sales, Carling lead lagers and Sharp's Doom Bar led cask ales. Facing rising inflation, consumers anticipate changing their drinking habits at pubs and restaurants. Most consumers expect to go out less frequently and drink less rather than switching to cheaper brands, should their discretionary budget shrink.
This text provides general information. Statista assumes no liability for the information given being complete or correct. Due to varying update cycles, statistics can display more up-to-date data than referenced in the text.
Published by Jan Conway, Aug 29, 2022

Annual per capita beer consumption in the UK
61L

Most popular beer categories in the United Kingdom (UK) 2022 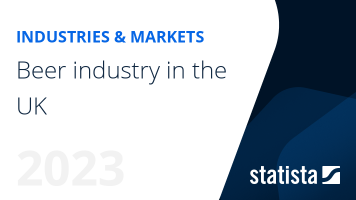 Go to report Beer industry in the UK
Top Seller

The most important key figures provide you with a compact summary of the topic of "Beer industry in the UK" and take you straight to the corresponding statistics.