Sugar in the UK is produced from sugar beets. Only sugar beets and sugar cane have a sufficient amount of sucrose for industrial sugar production. The British accelerated the spread of the sugar beet in Europe by blocking sugar cane imports into Europe during the Napoleonic wars. Today the UK produces over 7.4 million tons of sugar beets. Originally the Germans were the first to cultivate and grow the plant after discovering the sugar content in beets. The wider UK industry that manufactures sugar generates sales of 740 million British pounds. Wholesalers selling sugar, sugar confectionery, and chocolate in the UK made over eight billion British pounds in sales.

The United Kingdom has historically been one of the largest sugar beet producers in the world. Fields in the country were tied with fields in France in past years for the third highest yield of sugar beets per hectare in Europe. The sugar beets that the UK produced were worth 216 million British pounds and was turned into just under a million metric tons of sugar in 2020/2021.

Sugar is almost always consumed as an ingredient in food products where it is used as a sweetener. Consumers in the UK spent 12.7 billion British pounds on sugar, sugar confectionery and ice cream in 2021. Average weekly spending on sugar and preserves amounted to 19 pence in 2019/2020. The prices of sugar and confectionary products have been increasing over the past years. As of January 2022, the consumer index value of sugar and confectionery was measured at 106.8 points, up from 101.4 in January 2017.
This text provides general information. Statista assumes no liability for the information given being complete or correct. Due to varying update cycles, statistics can display more up-to-date data than referenced in the text.

Sales from the manufacture of sugar
830m GBP

Sugar, confectionery and ice-cream: Expenditure in the United Kingdom 2011-2021 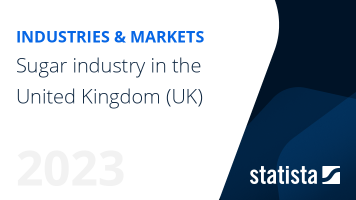 The most important key figures provide you with a compact summary of the topic of "Sugar industry in the UK" and take you straight to the corresponding statistics.