UK consumers spent 12.7 billion British pounds on sugar, confectionery, and ice cream. Spending has been growing in recent years. When expenses are broken down, consumers spent the most money on filled chocolate bars, followed by solid chocolate bars, and boiled sweets. They spent smaller amounts on mints, chewing gum, fudges, toffees, and caramels. These categories accounted for a combined average weekly spending of 9 pence per person. Roughly 3,446 specialized bakery and sugar confectionery stores sold these items in retail besides other retailers. The number of stores has remained mostly the same for over a decade.
This text provides general information. Statista assumes no liability for the information given being complete or correct. Due to varying update cycles, statistics can display more up-to-date data than referenced in the text.

Turnover of enterprises for the manufacture of cocoa, chocolate, and sugar confectionery
4.6bn GBP

Chocolate and sugar confectionary: turnover of enterprises in the UK 2008-2021

Sugar, confectionery and ice-cream: Expenditure in the United Kingdom 2011-2021

Chocolate and sugar confectionary: turnover of enterprises in the UK 2008-2021 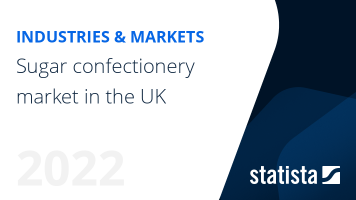 The most important key figures provide you with a compact summary of the topic of "Sugar confectionery market in the UK" and take you straight to the corresponding statistics.