Published by
Bruna Alves,
Jun 21, 2022
The Amazon is the world's largest rainforest. Its name stems from the homonymous river that irrigates its whole territory. The Amazon river itself was named after Greek mythology, inspired by the native female warriors that wandered its banks. Commonly referred to as the lungs of our planet, this rainforest harbors the most diverse ecosystem in the world. Occupying almost 40 percent of South America and encompassing the territory of nine countries, the magnitude of such natural haven extends over 1.4 billion acres of land. Around 60 percent of the Amazon rainforest is located in Brazil. The Legal Amazon area, a political region created in 1953 to protect its natural resources as well as promote economic development, comprises the territory of nine Brazilian states.

Despite its ecological and economic importance, the Amazon rainforest has suffered severe degradation in the past century. Since 2004, the Brazilian Amazon’s deforested area has added up to an accumulated 172 thousand square kilometers, an area roughly the size of Cambodia. In 2020 alone, more than 10 thousand square kilometers were affected. As a result, that year, approximately 16 percent of the Legal Amazon’s soil coverage corresponded to deforested areas. In the past three decades, Pará and Mato Grosso were the Brazilian states most affected by deforestation.

Agriculture and farming are among the main hazards for the survival of the rainforest. In fact, the area cultivated with crops in the Legal Amazon has nearly tripled between 2000 and 2019. However, and in some cases a result of expanding cultivation areas, wildfires have become one of the main causes of damage suffered by this ecosystem in recent years. In 2020, over 150 thousand wildfires outbreaks were detected in the Legal Amazon alone, the highest figure recorded in ten years. Meanwhile, the Amazon biome accounted for the majority of outbreaks in Brazil, representing nearly half of the wildfires identified throughout the national territory.

How does the Amazon’s degradation impact climate change?

The Amazon rainforest has long been regarded a vital resource in the mitigation of global climate change, with its extensive tree cover historically acting as a net carbon sink. However, at the current rate of degradation, this balance may be closer than ever to a tipping point. Annual greenhouse gas emissions from the Legal Amazon have continually increased in the past decade, recently surpassing one billion metric tons of CO2 equivalent. Changes in land cover, for example due to deforestation and wildfires, were by far the main source of emissions in the area. With the Amazon’s carbon emissions approaching its removal capacity, the rainforest’s days as the world’s lungs may be numbered.

In the following 5 chapters, you will quickly find the 25 most important statistics relating to "Amazon rainforest in Brazil".

The most important key figures provide you with a compact summary of the topic of "Amazon rainforest in Brazil" and take you straight to the corresponding statistics. 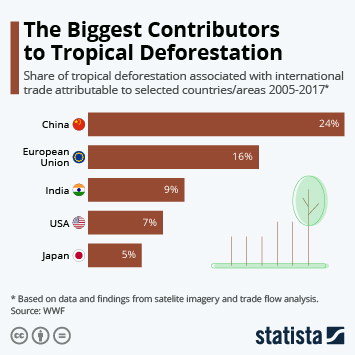