Podcasts in the UK - statistics & facts

Published by
Marie Charlotte Götting,
Feb 7, 2022
Podcast listenership in the United Kingdom (UK) has been increasing year on year, reaching an estimated 15.6 million listeners in 2020. This popularity of podcasts is mirrored in the results from a survey from 2021 in which 71 percent of respondents said that they were familiar with podcasts while 41 percent had listened to a podcast within the month prior to the survey. These numbers show the increased awareness people have of podcasts. With the UK reaching podcast consumption levels similar to other big markets such as the United States, podcast publishers become more important as they benefit from an growing number of streams and downloads. As of September 2021, the leading podcast publishers worldwide were iHeartRadio, NPR, as well as the New York Times and Wondery.

What do listeners look for when it comes to choosing a show? According to a survey from 2021, a majority of people in the United Kingdom listened to podcasts for entertainment, namely 61 percent. Another reason, which 52 percent of respondents listed, was that they wanted to learn something new or to improve their understanding of something they already know about. When it came to keeping listeners tuned in, time and entertainment seem to play a big role. A share of 48 percent said they stopped listening to podcasts because they could not find any that were interesting to them, while the second most named reason was lack of time to listen to podcasts. The decreased time spent commuting or in the gym due to Covid-19 restrictions did not seem to play a major role. As of 2020, 26 to 35-year-olds made up the majority of podcast listeners in the UK, followed by those aged 15 to 25. Considering the genres that people in the UK like to listen to, a survey from 2021 showed that across nearly all generations, comedy was the most popular podcast genre. Among male podcast consumers football was another genre in high demand, while women preferred to listen to true crime podcasts.

Spotify is by far the top app for music and audio in both the Google Play Store and among iPhone users, with over one million and over three million daily active users (DAUs) on each platform respectively. Not only that, in a bid to increase its foothold in the podcasting arena, Spotify has started to produce more and more exclusive podcasts while other streaming services have started to purchase smaller podcast platforms in order to compete with Spotify. With 75 percent of media experts surveyed claiming to plan to increase spending on podcast advertising over the next year, growth in the industry is to be expected. In 2020 alone, digital audio advertising spending in the UK amounted to 103.7 million pounds and with the increased popularity of podcasts, the format presents promising potential for advertisers in the future.

In the following 5 chapters, you will quickly find the 26 most important statistics relating to "Podcasts in the UK". 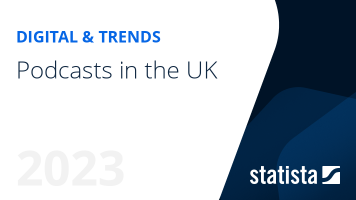 The most important key figures provide you with a compact summary of the topic of "Podcasts in the UK" and take you straight to the corresponding statistics.