Published by Statista Research Department, Nov 17, 2022
Russia had one of the highest gaming penetration rates in Europe. In the third quarter of 2021, nearly 79 percent of internet users in the country played games on any device. The market faced an exodus of game publishers in response to the Russian invasion of Ukraine in 2022. Companies like Activision Blizzard, Electronic Arts, Epic Games, CD Project, Game Insight, and Rovio suspended their operations in the country. As a result, the Russian video games industry is expected to lose nine percent of its revenue in 2022 compared to the previous year.

PC games led the market with over 85 billion Russian rubles in revenue in 2021. At the same time, mobile games' earnings grew at a 14 percent rate, faster than any other device segment. The domestic game development industry was mostly represented in the mobile segment, with major publishers including My.Games, Pixonic, MyTona, and Kefir!. My.Games, previously owned by VK, was sold to Alexander Chachava, Leta Capital's managing partner, in 2022. Also in that year, Sberbank closed its gaming unit SberGames reportedly because of the sanctions.

Which video games are popular in Russia?

In 2021, the best-selling video games by physical unit sales in Russia were GTA 5, Cyberpunk 2077, and Marvel's Spider-Man: Miles Morales. A role-playing fantasy game Hero Wars, published by Nexters, was the highest-earning mobile game based on in-app revenue in 2021. Other popular mobile games were Gardenscapes and Homescapes developed by Playrix, a company headquartered in Ireland and founded by Russian brothers Igor and Dmitry Bukhman. In the console segment, Russians preferred to play racing games.

Most Russians purchased video games once every six months or more rarely, while the share of those who spent money on new games once a month was below 20 percent, according to data from 2022. In total, players across the country spent over one billion U.S. dollars on mobile games in 2021, having increased their expenditure continuously in recent years. Some of this amount went on additional game items, such as in-game currency and boosters. In 2022, 16 percent of Russians made in-game purchases, while 14 percent downloaded paid games.

In the following 7 chapters, you will quickly find the 49 most important statistics relating to "Video games industry in Russia". 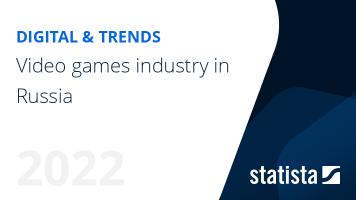 The most important key figures provide you with a compact summary of the topic of "Video games industry in Russia" and take you straight to the corresponding statistics.