Published by
C. Simionato,
Feb 9, 2022
With the onset of climate change awareness on a global scale, consumers have sought out more environmentally friendly outlets in order to sustain their growing spending habits. One of the outcomes from this shift of mindset is the rising success of sustainable practices in retail. In Brazil, considered the third most sustainable country in Latin America, not only has the trend translated to greater support for overall eco-conscious marketing, but also support for social-environmentally responsible businesses. However, despite these beliefs rising in popularity, many Brazilians are withheld from investing fully into the practice of sustainable consumerism due to a perceived lack of support from companies and the government, as well as general affordability.

As frail as their convictions may be, Brazilian shopping behaviors tell a different story. In a recent survey assessing the frequency of behaviors and attitudes considered sustainable, over 70 percent of respondents said they always preferred the most efficient electrical appliances, while around six out of ten tried to fix broken appliances instead of buying a new one. More than half of consumers surveyed stated they always avoid purchasing environmentally harmful products. In fact, most consumers in Brazil were considered either sustainability conscious or in transition towards becoming more conscious, with less than two out of ten respondents being deemed non-conscious.

Nevertheless, there remains much progress to be made on the sustainable consumer front in the South American giant. Even with sustainability concerns growing, many consumers feel undeterred to change their consumption habits. In 2019, less than four out of ten consumers stated they were concerned about the environmental aspects of a goods' production prior to purchasing or were willing to pay more for environmentally friendly products, according to two different surveys conducted. Rather than be motivated by environmental concerns, Brazilian consumers have seemingly been the most provoked to adopt sustainable attitudes based on economic gains. For example, savings from transaction costs was the main motivation for buying used products amongst Brazilian consumers in 2019. Still, the sales revenue of used products in the country has grown by 22 percent between 2014 and 2018. Ultimately, this incremental trend not only hints at a steadily more-welcoming market for sustainable retail business practices, but also an evolving change in Brazilian public attitudes towards environmental consciousness.

In the following 5 chapters, you will quickly find the 22 most important statistics relating to "Sustainable retail in Brazil". 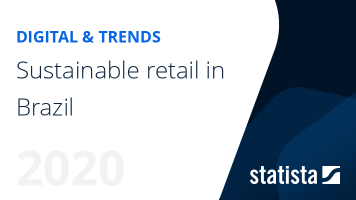 The most important key figures provide you with a compact summary of the topic of "Sustainable retail in Brazil" and take you straight to the corresponding statistics.