Video gaming has become a mainstream leisure activity in France and this position has only been solidified during the COVID-19 pandemic as many people turned towards gaming not only for entertainment but also for socializing purposes. Digital video gaming revenues in France are projected to reach nearly 4.44 billion U.S. dollars in 2026, up from 2.87 billion U.S. dollars in 2021. Console gaming is the preferred gaming platform in France, with PC coming in second after narrowly edging out mobile. In 2021, console gaming sales in France amounted to 2.75 billion euros, accounting for 48 percent of the market.

As of 2021, more than half of the French population identified as gamers, which translates to approximately 36.5 million gamers in France. The profile of French gamers is very varied and cannot be limited to one age group or gender. Video gaming penetration is almost universal among 10-14-year-olds, and this figure gradually decreases with age. Regardless of age, the share of female gamers almost equals the share of their male counterparts.
Almost half of French gamers played video games nearly every day or more often, and the average weekly gaming time amounts to approximately 9.2 hours, which puts France slightly under the average of other European markets such as the UK or Germany.

The rankings of the top-selling games in France currently highlight the dominance of the console gaming segment. The best-selling video game in France was FIFA 22, followed by Call of Duty: Vanguard, and Mario Kart 8 Deluxe. Action and sports games are the best-selling gaming genres in France, followed by role-playing and shooter games.
Overall, 78 percent of internet users in France stated that they played video games on any device, with smartphone ranking ahead of consoles in terms of usage reach.

The video game industry in France

The video game industry is one of the leading digital media industries in France. As both a producer and consumer, France has been able to carve out its share of the international market. With successes such as the best-selling game Assassin’s Creed, published by French company Ubisoft, or mobile games, this industry has been able to invite itself into the living rooms of many French people. Many developers established in France have emerged over the years, following in the footsteps of Ubisoft, and have been able to demonstrate French know-how and expertise on the international stage.
This text provides general information. Statista assumes no liability for the information given being complete or correct. Due to varying update cycles, statistics can display more up-to-date data than referenced in the text.

Number of gamers in France
36.5m 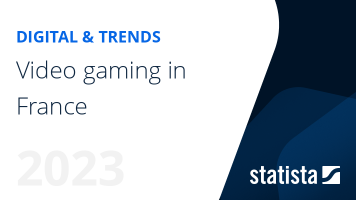 The most important key figures provide you with a compact summary of the topic of "Video gaming in France" and take you straight to the corresponding statistics.