Published by Statista Research Department, Jan 7, 2022
How do Belgian entrepreneurs finance their future investments? For years, bank credit was an important source for the company plans, especially for SMEs (companies which have between 10 and 249 employees). In 2020, for example, these small and medium enterprises accounted for more than half of all bank loans to non-financial companies, a figure higher than bank loans towards large enterprises or micro-enterprises. Nonetheless, bank loans became more difficult to get a hold of. Much like in neighboring countries Luxembourg and the Netherlands, business executives deemed Belgium a country where it could be difficult to obtain bank funding, ranking it with 4.5 on a scale from one to seven in a 2019-survey. Indeed, one out of three SMEs in Belgium said in 2019 that bank loans were a funding source "irrelevant to their enterprise", instead opting for alternative finance methods.

Alternative corporate finance in Belgium was mostly comprised of investment funds, with a market size over ten times that of leasing, for example. Companies did not use leasing often, with industrial machinery being the most popular movable property to lease in 2019. This strong influence of investment funds might stem from the fact that Belgium had a large amount of them: as of the first quarter of 2020, there were nearly 740 UCITS funds in Belgium, compared to significantly less AIF funds. UCITS stands for Undertakings for Collective Investments in Transferable Securities and at its core stand for investment funds that are domiciled in Europe and regulated by the European Union. AIF stands for Alternative Investment Funds and include all investment funds that have not yet been regulated by the European Union. This includes hedge funds, funds of hedge funds, venture capital and private equity funds and real estate funds.

Venture capital and crowdfunding in Belgium

Both types of alternative finance are present in Belgium, but figures can vary significantly from year to year due to the small size of the country. Venture capital investments in Belgium, for example, grew by around one percent in 2019, reaching nearly 750 million euros. A significant part of this value, however, was made up by a finance round for data intelligence company Collibra. This startup received an investment of 100 million U.S. dollars in 2019 from Google's investment branch CapitalG. Differences are also observed when looking at crowdfunding investments in Belgium. Crowdfunding credit was worth around 30 million euros in 2016, before decreasing to less than 25 million euros in 2017.

In the following 5 chapters, you will quickly find the 22 most important statistics relating to "Corporate finance in Belgium". 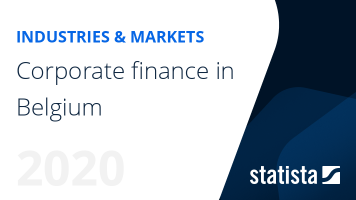 The most important key figures provide you with a compact summary of the topic of "Corporate finance in Belgium" and take you straight to the corresponding statistics.