Skin cancer is one of the most commonly diagnosed cancers in the United Kingdom. The two main types are melanoma and non-melanoma, which can be either a basal cell carcinoma or a squamous cell carcinoma. Non-melanoma skin cancers are more common, although the mortality rate is higher from melanomas. In 2018, the UK had the fourteenth highest rate of skin cancer diagnoses in the world. The two countries with the highest rates globally are Australia and New Zealand, and as exposure to the sun is a risk factor, in a recent survey almost 30 percent of Brits reported reducing their exposure to UV rays due to the cancer risk.
In 2017, there were 232 cases of non-melanoma skin cancer per 100,000 people in the UK. More cases are recorded among men than women. Over the last 25 years the UK rate has increased significantly. The frequency of melanomas has also increased considerably over the same time period. In 1993, there were approximately 11 cases of melanoma skin cancer per 100,000. By 2017 this rate had increased to 25.

As mentioned previously, the fatality rate from melanoma skin cancer is over three times higher when compared to non-melanoma skin cancer. Over the previous ten years there has been little change in the melanoma mortality rate in the UK, although before that the rate had been increasing steadily through the 1980s and 1990s. Again, there is a pronounced variation between mortality for males, which is higher, compared to females. Early detection of skin cancer is crucial to a person’s chances of survival. From 2013 to 2017, every person who was diagnosed with stage one (the earliest stage of detection) melanoma skin cancer in England survived for at least one year after being diagnosed, while over 99.6 percent survived for five years.
This text provides general information. Statista assumes no liability for the information given being complete or correct. Due to varying update cycles, statistics can display more up-to-date data than referenced in the text.

Melanoma skin cancer incidence in the United Kingdom 1993-2017, by gender

Number of dermatology consultants in the UK
626

Melanoma skin cancer incidence in the United Kingdom 1993-2017, by gender 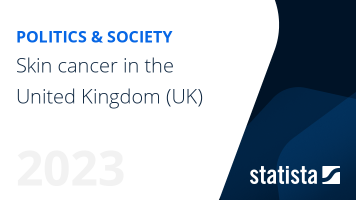 The most important key figures provide you with a compact summary of the topic of "Skin cancer in the UK" and take you straight to the corresponding statistics.