While France is among the global leaders in the cosmetics sector, it also has to adapt to developments in tastes, behaviors and mentalities, such as the increasing rejection of chemical products by consumers, or the growing influence of the internet and social networks on their choices. Adjusting to these new trends is connected to keeping a leading position on the market.

France benefits from a significant competitive advantage in the global cosmetics market. French companies representing the sector, such as L’Oréal and Yves-Rocher, are indeed exporting and benefiting from a very dynamic demand in geographical areas like Asia-Pacific. For several years now, France has in fact been recording a trade surplus in cosmetic products. In 2019, the country had imported chemicals, perfumes and cosmetics worth 45 billion euros and exported about 59.7 billion euros.

A growing market for organic and natural cosmetics

However, with the rising interest in issues such as sustainable development and environmental protection, this market is compelled to innovate and reinvent itself in order to meet the changing needs of consumers. For instance, the share of French women purchasing organic cosmetics and hygiene products has increased significantly over the last decade: while 33 percent of French women were buying such products in 2010, nearly 60 percent were using them in 2018. Thus, whereas there was hardly any twenty years ago, the organic and natural cosmetics sector in France recorded a turnover of around 757 million euros in 2018.

Current digitalization and personalization trends are playing an increasingly important role in the French cosmetics market. According to the 2019 annual report published by the L’Oréal group, digitalization is one of the main levers of economic growth. The cosmetics industry has indeed benefited from the rising popularity of social media such as Instagram and YouTube. Not only are these platforms very influential among some groups, but they create demand for beauty products, and help fill the gap between cosmetic brands and consumers. However, cosmetic and beauty brands seem to have lost the monopoly on speaking out about their products, in favor of influencers communicating via specialized blogs or YouTube videos, on products that were traditionally promoted by the brands themselves.
This text provides general information. Statista assumes no liability for the information given being complete or correct. Due to varying update cycles, statistics can display more up-to-date data than referenced in the text.
C. Simionato
Research expert covering DIY, home improvement and furniture retail
Get in touch with us now
Published by C. Simionato, Jan 11, 2022 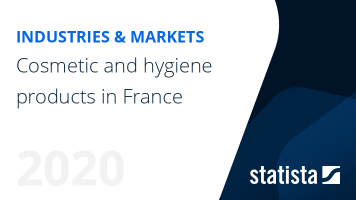 The most important key figures provide you with a compact summary of the topic of "Cosmetic and hygiene products in France" and take you straight to the corresponding statistics.