Metal mining in the United Kingdom dates back thousands of years, with copper the first metal to be mined in Britain. The largest known bronze age copper mine in the world, the Great Orme site, was discovered in Wales in 1987. Mining at this site began almost 4,000 years ago. Many other ancient mines have been found across Britain, which shows that metal mining on an industrial level started well before the industrial revolution. The copper from these prehistoric mines was mixed with tin extracted in Cornwall to produce bronze weapons and tools. Nowadays, copper is most commonly used in the production of wires and cables. The industry revenue of copper production in the UK is expected to amount to more than half a billion U.S. dollars in 2024.

The decline of the UK metal mining industry

Cornwall is a historical mining area and has been exploited for its metal reserves for many years. By the 18th century, Cornwall was the world’s leading producer of copper and tin. In the 19th century, two-thirds of the world's copper supply came from Cornwall. However, metal mining in Britain has decreased significantly since its peak in the 18th and 19th centuries. Although there are still large reserves of metal ores in Britain, it is now more cost-effective to import metals from other countries rather than produce its own. Nowadays, mining in the UK is mainly for energy sources such as oil, gas, and coal. However, much like metal production, coal production in the UK has also plummeted since it’s heyday.

The future of metal mining in the UK

Cornwall’s last tin mine closed in 1998, but there have been plans in recent years to reopen these historic sites for the extraction of materials for electronics. Deposits of lithium are also thought be present in these mines, which is a metal used to powers electric vehicles. Tungsten production in the UK recently experienced a surge after Drakelands tungsten mine in Devon was reopened in 2015. Production increased in the following years, making the UK one of the leading tungsten producers worldwide. However, in 2018 the mine was forced to shut down due to financial problems.

The metal mining industry has important cultural significance in Britain, specifically in South West England, to the point this regions landscape was given UNESCO world heritage status in 2006. Innovative mining technologies spread from this region to around the world. Conversly, another legacy from the metal mining industry is its negative environmental impact. Many rivers in the UK are polluted with metals such as lead, zinc, copper, and iron, caused by discharges from abandoned metal mines. Recently, new technologies have made it possible to remove 99.5 percent of metals found in rivers through an electrochemical separation technique.
This text provides general information. Statista assumes no liability for the information given being complete or correct. Due to varying update cycles, statistics can display more up-to-date data than referenced in the text.

Number of metal ore mining enterprises in the EU-28
392 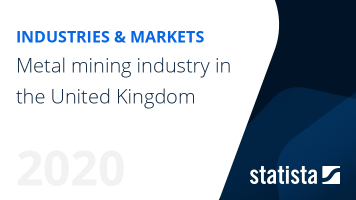 The most important key figures provide you with a compact summary of the topic of "Metal mining industry in the UK" and take you straight to the corresponding statistics.