On July 25, 2017, British American Tobacco fully acquired Reynolds American Inc. and since then, its leading cigarette brands in the United States are manufactured and marketed by R.J. Reynolds Tobacco Company. This includes some of the nation’s best-selling cigarette brands such as Newport, Pall Mall and Camel. In the United States, the London-based company generated revenues in excess of 14 billion U.S. dollars in 2020, which makes the U.S. its single largest consumer market, constituting more than 40 percent of its revenue share by region.

With rising public awareness of the health risks associated with cigarette smoking, the number of cigarettes sold in the United States has declined significantly over the years. To maintain their market position, tobacco companies have had to diversify their product offerings to include noncombustible tobacco products like electronic cigarettes and modern oral nicotine products. In 2020, four million American consumers have tried to quit smoking by switching to e-cigarettes. British American Tobacco has introduced Vuse electronic cigarettes and VELO nicotine pouches as part of its wider effort to offer customers harm-reduction products and to safeguard its position as the market leader in the tobacco industry.

In the following 3 chapters, you will quickly find the 20 most important statistics relating to "British American Tobacco". 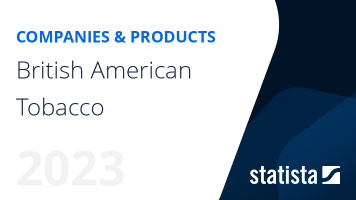 The most important key figures provide you with a compact summary of the topic of "British American Tobacco" and take you straight to the corresponding statistics.

Cigarettes in the U.S.

Smokeless tobacco in the United States

Recreational cannabis in the United States