The digitalization in the media in Thailand - statistics & facts

Published by Statista Research Department, Nov 23, 2021
Digitalization is becoming increasingly prevalent in the daily lives of average Thai consumers. This transition arose from the growing rate of the country’s internet penetration as well as the increasing smartphone penetration rate in Thailand. The Thailand 4.0 economic model emphasized digitalization as part of the country's development and has led many sectors to adapt to this development plan, the media sector in particular. This sector acts as a medium between consumers and enterprises. There have been substantial amounts of investment from media enterprises into digital platforms, pushing the media sector to digitalize to convey more content to consumers.

Media and entertainment platforms in Thailand

Despite media outlets being controlled and owned by the government and the military, Thailand’s media sector is considered to be quite progressive compared to other countries in Southeast Asia. Television is the most popular form of media among Thais. Because of this, television was the advertising medium with the highest share of ad spend in Thailand. The sector is, however, currently being dominated by digital providers. Internet television is becoming increasingly popular with True Move being the major player within this subsector. Furthermore, internet radio and music streaming are also popular for those who are on-the-go. Thailand’s music streaming market is dominated by Joox, Apple Music, and KKBox.

As for printed media, consumption under this category has declined in recent years since the demand for reading content has shifted towards mobile devices and tablets. This is especially so for the younger generation, for whom printed media such as newspaper and magazines were not as popular as they are for the older generation.

Thais spend the majority of their time throughout the day on the internet. Watching television and streaming music are amongst the top online activities which Thais spend a large portion of their time on. Since TV, radio, and internet content are the top-visited outlets for media consumption, advertising revenue under these channels have risen and remained relatively stable in recent years. Another popular media platform in Thailand is Facebook, which has a penetration rate there. It has now become a major online source for news, information, and even entertainment for Thai online consumers, not only as a social media platform for communication.

Although the internet is important for media consumption, Thai users still experience some of the most common problems with using the internet, such as faulty internet connectivity, content unreliability, and an overabundance of advertisements.

A gradual farewell to traditional media

Almost all forms of traditional media in Thailand have transitioned to meet new demands towards a more digitalized platform for the convenience of consumers and advertisers. With more digital integration in Thai society along with a rising need for more media consumption during the COVID-19 pandemic, it is no doubt that there are increasing importance and potentially lucrative opportunities for digitalized content in the coming years.

In the following 5 chapters, you will quickly find the 28 most important statistics relating to "The digitalization in the media in Thailand ".

Statistics on the topic
Forecast annual GMV of the online media market in Thailand in 2025
7.9bn usd
Forecasted value of digital spending among consumers in Thailand
21.4bn usd
Growth rate of online businesses in the movie and music industry in Thailand
71.2% 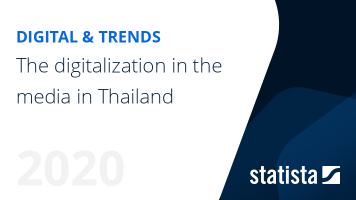 The most important key figures provide you with a compact summary of the topic of "The digitalization in the media in Thailand " and take you straight to the corresponding statistics.

The digital market in Thailand

Digitalization in the media industry in Sweden

Digitalization in the media industry in Denmark