Dentistry in Japan became an independent field of medicine after the westernization period and subsequent reformation of the medical system in the Meiji Era (1868-1912). In the eras before Meiji, dental problems were primarily treated as part of oral medicine. The first clinic operating with a dentist license based on modern European dental medicine opened in Tokyo in 1874. After the establishment of the Medical Care Act and the Dental Practitioners Act in 1948, many universities integrated dentistry departments. The number of dentists and dental clinics further increased in the 1960s and 1970s. In the last decade, the number of dentists and treatment centers in Japan remained constant with about 68 thousand dental clinics - around 54 clinics per 100,000 inhabitants.

Dental clinics in the modern society

In modern Japanese society, dentistry is mainly offered through outpatient services at dental clinics. Only patients with severe symptoms that require surgeries with general anesthesia, for example, tend to be treated in general hospitals with dentistry or dental surgery departments. Unlike hospitals, which most commonly operate as medical corporations, dental clinics are often privately owned.
The dentistry profession is mainly divided into dentists, dental hygienists, and dental technicians. Dental hygienists assist the treatment and surgeries of patients, while dental technicians manufacture dental-related parts like prostheses and artificial teeth. Due to the stagnating or declining population in many regions in the country, an oversupply of dentistry clinics has become a problem in recent years. Consequently, an increasing number of dental clinics provide more specialized and profit-oriented services such as dental implants or teeth whitening - both not covered by insurance.

Dental health of the aging population

Until recently, the emphasis of dentistry in Japan was the treatment of already damaged hard tissues such as root canal therapy or prosthodontics. Due to the rapidly aging population and the following increase of national expenditure on healthcare including dental treatments, the focus is gradually shifting to prophylactic treatments of, for example, periodontal disease. Dental treatments at home or nursing facilities for bedridden patients have also become more common. The health ministry and the Japan Dental Association have carried out promotion projects such as “8020 - 20 teeth at the age of 80”. This aims to raise awareness of the importance of the proper maintenance of teeth and gums. As of 2019, the ratio of the population over 70 years old who maintained more than 20 teeth increased to around 45 percent from about 29 percent in 2004.
This text provides general information. Statista assumes no liability for the information given being complete or correct. Due to varying update cycles, statistics can display more up-to-date data than referenced in the text.
Published by Statista Research Department, Nov 8, 2022 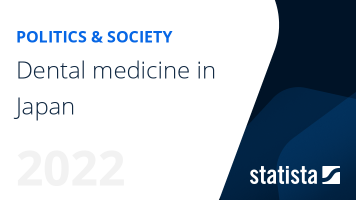 The most important key figures provide you with a compact summary of the topic of "Dentistry in Japan" and take you straight to the corresponding statistics.