Mobile devices are electronic devices that can be held easily in hand and designed with a focus on portability. Examples of mobile devices include smartphones, tablets, laptops, smartwatches, e-readers, and handheld gaming consoles. In the UK, smartphones and laptops are among the most owned devices within households, with wearable devices such as smartwatches and fitness trackers growing in popularity over recent years.

By 2025, it is forecast that nearly 63 million people in the UK will be using a smartphone, a sharp increase from the 22 million people just ten years ago. Those aged between 16 and 34 are most likely to use such devices, although there has been a noticeable increase in smartphone usage in people aged 55 to 64. For tablet computers, ownership is highest in the 35 to 44 age category, although once again, it is those aged 55 years and above where the strongest uptake of tablet computers has been observed in recent years. By 2026, it is forecast that sales of tablet computers in the UK will equate to just under 2.14 billion U.S. dollars. Revenue fromlaptop sales is set to reach 6.65 billion U.S. dollars in the UK during the same year.

In terms of vendors of mobile devices, Apple and Samsung dominate the smartphone and tablet markets in the UK. For smartphones, Apple’s market share stood at around 52 percent in 2021, while Samsung occupied 28 percent. For tablets, Apple and Samsung again ranked first and second, occupying 60 and 19 percent of the market respectively. Apple have been losing some of their market share in recent years, as Samsung and Amazon improve their tablet offerings.

While Amazon has increased its share within the UK tablet market, it is within the e-reader market where the company performs strongest with its Kindle devices. Other mobile device markets, such as smartwatches, also see Apple and Samsung feature heavily, alongside the likes of Fitbit and Garmin.
This text provides general information. Statista assumes no liability for the information given being complete or correct. Due to varying update cycles, statistics can display more up-to-date data than referenced in the text.
Published by Statista Research Department, Oct 27, 2022

Consumer electronics ownership in the UK 2022

Average number of devices UK households have access to
9

Connected device penetration in the UK
81% 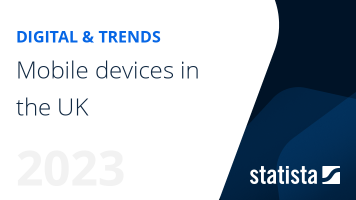 Go to report Mobile devices in the UK
Top Seller

The most important key figures provide you with a compact summary of the topic of "Mobile devices in the UK" and take you straight to the corresponding statistics.