Published by
Justina Alexandra Sava,
Nov 17, 2022
Whether used to communicate, access information, or play games, smartphones have become vital tools for individuals worldwide. Latin America is no exception, as smartphone sales were estimated at 134.35 million units in 2021, increasing by 15.5 percent compared to the previous year. In just seven years, the number of smartphone subscriptions in Latin America is forecast to increase by nearly 100 million, with Brazil remaining the most important smartphone market in the region. By 2025, the country is estimated to exceed 200 million smartphone connections.
The increase in smartphone usage was a natural consequence of Latin America’s expanding e-commerce market. The coronavirus (COVID-19) pandemic boosted the adoption of online shopping habits, with Brazil, Mexico, and Argentina having the most promising markets in terms of online sales. In 2022, retail e-commerce sales through mobile phone devices were approximated at 26.8 billion U.S. dollars, up from 18.32 billion U.S. dollars in 2019. Another factor that led to the increasing number of smartphones in Latin America was 5G network deployments, which translated into 35 million 5G mobile subscriptions by the end of 2022.

Since January 2019, the South Korean tech conglomerate, Samsung, has maintained a market share of over 44 percent in South America, making it the leading smartphone manufacturer in the region. When it comes to Chinese smartphone manufacturers, Huawei has been one of the most popular smartphone brands in Latin America, accounting for over 20 percent of the market in Peru, Chile, Colombia, and Mexico by the end of 2020. However, 2021 saw the rise of Xiaomi smartphones. Despite being present in the Latin American market for already a couple of years as an affordable brand, Xiaomi surpassed Appel’s market share in South America, becoming the third most popular brand in the region, after Samsung and Motorola. Meanwhile, Latin American smartphone brands, such as BGH, Positivo, and Lanix, seemed to have lost their potential for expansion, judging by their modest and declining market shares.

The smartphone adoption rate in Latin America amounted to 72 percent in 2020, with Brazil having the highest rate, followed by Argentina and Mexico. Consequently, this led to monthly mobile data traffic in Latin America of 3.5 exabytes in 2021 - forecast to increase by 200 percent in the next four years – and monthly data traffic of 7.9 gigabytes per smartphone. While so far, smartphone activities have concentrated around communication and entertainment, rising smartphone adoption is bound to increase the integration of services such as mobile commerce, mobile banking, or mobile health firmer into the Latin American reality. For instance, the number of mobile gaming users in South America stood at over 113 million people as of 2021. The Statista Digital Market outlook estimated an increase up to 143 million users by 2026.

In the following 7 chapters, you will quickly find the 36 most important statistics relating to "Smartphone market in Latin America". 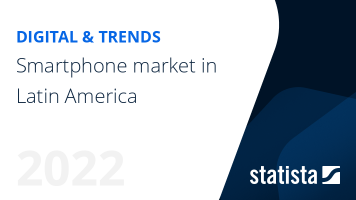 The most important key figures provide you with a compact summary of the topic of "Smartphone market in Latin America" and take you straight to the corresponding statistics.