The telecommunications industry in the United Kingdom (UK) is responsible for keeping the UK's roughly 68 million inhabitants connected with each other and the world. Despite some periods of decline, the industry still generated revenue amounting to more than 31 billion British pounds in 2021.

Dips in revenue can partially be attributed to the lower prices companies are charging in certain segments of the market. The overall level of average revenue per user (ARPU) has decreased for both pre-paid and post-paid mobile consumers in recent years, a phenomenon that is evident among providers such as Vodafone and BT.

Mobile has slowly replaced fixed-line voice communication as the preferred method of making voice calls in the UK. Mobile voice call minutes exceeded fixed-line minutes for the first time in 2010, and since then the gap has increased. In 2021, inhabitants of the UK made around 187 billion minutes worth of calls over mobile networks, compared to about 40 billion minutes over fixed networks.

The total number of call minutes, fixed-line and mobile combined, was decreasing for years until 2020, when the social effects of the coronavirus (COVID-19) pandemic became apparent - the total number of minutes spent on phone calls increased for the first time since 2012 by approximately 34 billion minutes, as people replaced face-to-face contact with phone calls. This level slightly decreased again in 2021.

The humble SMS message has also fallen out of favor, likely a victim of the popularity of free messaging apps such as Whatsapp and Facebook Messenger. The number of outgoing SMS and MMS messages sent in the UK fell from nearly 151 billion messages in 2012 to roughly 49 billion messages in 2020.
This text provides general information. Statista assumes no liability for the information given being complete or correct. Due to varying update cycles, statistics can display more up-to-date data than referenced in the text.
Published by Statista Research Department, Sep 21, 2022

Number of fixed lines in the UK
32.1m 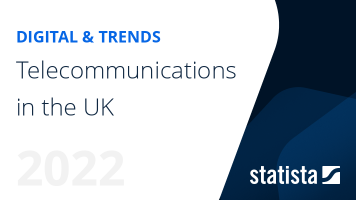 Go to report Telecommunications in the UK
Top Seller

The most important key figures provide you with a compact summary of the topic of "Telecommunications industry in the UK" and take you straight to the corresponding statistics.