The film industry in West-Africa is booming, with Nigerian productions being the largest in the region and in all of Africa. In terms of revenue, Nigeria generates the largest share of box office revenue in anglophone West Africa. The high percentage is directly related to the large population of Nigeria (over 200 million people), compared to the smaller populations of Liberia and Ghana. In 2019, the box office revenue originating from Liberia, Ghana, and Nigeria amounted to approximately 16 million U.S. dollars, with a total of over five million admissions. However, due to the coronavirus pandemic cinemas were closed. They reopened only in Nigeria in September 2020. Thus, admissions as well as revenue considerably dropped in 2020, reaching only 1.7 million admissions, about 67 percent less compared to 2019, while revenue added up to roughly 4.6 million U.S. dollars.

The largest cinemas in anglophone West-Africa are mostly located in Nigeria and Ghana, while in Liberia no movie theater has more than 500 seats. As of 2020, the biggest movie theaters were in the capital cities of Abuja and in Accra, two sites of Silverbird Cinemas. In fact, many large movie theaters belong to the chain Silverbird Cinemas. Some other large cinema chains across anglophone West-Africa are Lighthouse, Filmhouse, and Genesis. In 2020, the average price for a movie ticket across Liberia, Ghana, and Nigeria was 2.7 U.S. dollars, or 1.2 thousand Naira. The tickets are, in relation to people's average salaries, quite expensive. For instance, in Nigeria, the minimum living wage is estimated to be around 110 U.S. dollars per month. Similarly, in Ghana the average wage is roughly 155 U.S. dollars.

In 2020, most of the titles released across English-speaking West-Africa were produced by Nollywood. Hollywood and Bollywood movies were the second and third most popular productions in this region. Kannywood, instead, released 10 movies in Hausa language in 2020, whereas Ghollywood, Ghana's main film industry, released two movies. The same year, the best selling movie pictures from Nollywood was Omo Ghetto, Fate of Alakada, Rattle Snake, and Quam's Money. When taking into account also movies released in 2019, the movie with the highest box office in 2020 in Nigeria was Sugar Rush, a crime action comedy released in December 2019.

Source of income and employment

The film industry represents an important source of income and employment for West-Africa. According to data from 2020, the whole creativity and information industry accounted for 15 percent of Nigeria's GDP. Nollywood has also received some financial support such as loans and grants by the Nigerian government. The grants were supported by the government's Project Act Nollywood, an investment aiming to gain better productions, distribution networks, and capacity building. Furthermore, this sector employed over five thousand people in Ghana. One other source of revenue is advertising in cinematography productions. In 2018, ads originated a value of some 400 thousand U.S. dollars in Ghana and 700 U.S. dollars in Nigeria.
This text provides general information. Statista assumes no liability for the information given being complete or correct. Due to varying update cycles, statistics can display more up-to-date data than referenced in the text.
Doris Dokua Sasu
Research Expert covering primarily society and agricultural topics for Africa, particularly Ghana and Nigeria
Get in touch with us now
Published by Doris Dokua Sasu, Jun 28, 2022

Revenue of movies in anglophone West Africa 2019-2021, by country

Admissions in cinemas in Liberia, Ghana, and Nigeria
3.4m

Market value in Nigeria and Ghana 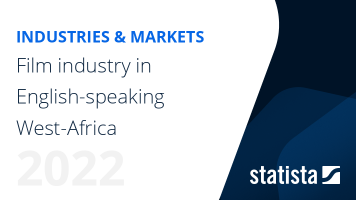 The most important key figures provide you with a compact summary of the topic of "Film industry in English-speaking West Africa" and take you straight to the corresponding statistics.