Video on demand platforms and services have been experiencing an unprecedented leap of popularity and have profoundly changed the consumption habits of many viewers. Many consumers would rather choose a program from a wide variety of available movies or TV shows than wait for it to be broadcast on television.
Video on demand (or VOD for short) is a video content service available via the internet or non-cable networks. The increasing access to a high-speed internet connection in French households has led to growing interest in the market for VoD platforms. In less than ten years, the value of the entire video-on-demand market has more than quadrupled in France and surpassed the 1.7 billion euro mark in 2021.

Video on demand has gained ground in recent years and should reach more than 28 million users in France by 2025. Subscription-video-on-demand (or SVoD) platforms are the most popular type of video-on-demand services. A monthly or annual paid subscription is required to access the available video offered by the platforms. With more than six million users in France in 2021, Netflix was by far the most used SVoD platform in France. The VOD market is extremely competitive and dominated by U.S. giants such as Netflix, Amazon or the new Disney service, leaving little room for French competitors.

Due to the coronavirus (COVID-19) outbreak and the several lockdowns implemented in France, people spent more time at home and inevitably in front of their television set, which is by far the preferred device among consumers to watch VoD content, ahead of laptops or other mobile devices. Many French viewers took this opportunity to subscribe to a new VoD platform in order to occupy themselves. Disney+ in particular, which launched in France in April, has recorded an increase in new accounts created over that period.

Despite the multiplication of free offers, illegal consumption of cultural goods is still very present in France, and video content is far from being spared. High account prices or numerous platforms available may be an explanation. Illegal consumption takes on several forms, such as using another user's access codes or internet connection, using a VPN or downloading content directly via Torrent links.
This text provides general information. Statista assumes no liability for the information given being complete or correct. Due to varying update cycles, statistics can display more up-to-date data than referenced in the text.
Published by Statista Research Department, Jul 22, 2022

Ranking of video-on-demand platforms in France 2021, by usage

Subscribed to one VoD platform
28%

Ranking of video-on-demand platforms in France 2021, by usage 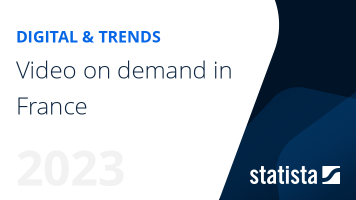 Go to report Video on demand in France
Top Seller

The most important key figures provide you with a compact summary of the topic of "Video on demand in France" and take you straight to the corresponding statistics.