With over 30 prominent languages used across the country, India is home to a diverse media and entertainment industry. The flourishing industry has recorded immense growth since it established itself as a prominent participant in the country’s economy. Until the 21st century, television, film, print media and radio dominated the entertainment industry across the country, owing to the positive market sentiment and augmented demand for media consumption. In recent years, the industry has taken significant strides especially in the digitization of the fields of television, films, and music.

Conventional pillars of the industry

The television media is among the preferred choice of media consumption in the country. The main flag bearers of the industry are prestigious media houses like Zee Entertainment Enterprises, STAR network and Sun TV network. Similarly, the film industry has displayed a promising growth rate over the past years, following high budget productions and successful box-office revenues. The film industry has expanded its horizon to foreign nations even though its domestic popularity is unmatched. The localized print industry has been the source of regional broadcasts and is often used as advertisement opportunities to a niche demographic.

Unsurprisingly, the media and entertainment industry is among the fastest growing markets across the country on account of the unprecedented advancement of technology, rendering favorable conditions for consumption thanks to the ease of accessibility services across the nation.

Digitization and the evolution of media

The Indian demographic has witnessed a rapidly growing young population with access to high speed internet and portable devices to harness its potential. The technology dependent sectors of the entertainment industry benefitted from this increased usage of the available 3G and 4G internet spectrum resulting in the emergence of the online gaming, VFX and animation and over-the-top (OTT) media applications.

Online video platform subscriptions have shown promising growth over the last few years to attract foreign investment and mergers into this market. Early 2020 saw the arrival of Disney into the domestic market as Disney+Hotstar, a STAR network initiative to distribute regionally dubbed Disney+ shows and movies. Despite the emergence and establishment of a new contender, the Indian pay TV sector remained resilient with expert assessments deeming it a viable market. Market leaders such as Tata Sky and Airtel continue to be the popular choice among subscribers. Additionally, government initiatives also favor more capital inflow from foreign investors with the FDI limit being increased from 74 to a 100 percent in cable and DTH satellite platforms.

Despite the onset of the coronavirus (COVID-19) pandemic, the industry was set to make a quick recovery. With an estimated higher growth rate compared to other M&E markets around the world, rural markets are potential profit area for the country.
This text provides general information. Statista assumes no liability for the information given being complete or correct. Due to varying update cycles, statistics can display more up-to-date data than referenced in the text.
Tanushree Basuroy
Research expert covering India
Get in touch with us now
Published by Tanushree Basuroy, Apr 6, 2022

Value of the media and entertainment industry in India 2019-2024

Size of M&E industry in India FY 2021 by segment

Value of the media and entertainment industry in India 2019-2024

Size of M&E industry in India FY 2021 by segment 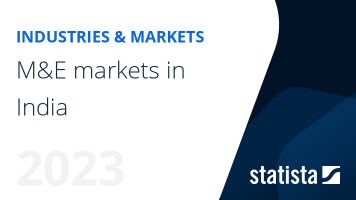 Go to report Media and entertainment in India
Top Seller

The most important key figures provide you with a compact summary of the topic of "Media and entertainment in India" and take you straight to the corresponding statistics.