Published by G. Wanat, Jul 7, 2022
Beer is a popular and widely enjoyed beverage in Poland, with nine in ten inhabitants consuming it. Therefore, it comes as no surprise that the country figures among the top three exporters of beer in Central Europe; thus making it one of the leading markets in the region.

In the last two decades, the volume of beer produced increased by more than 60 percent. The flourishing market provides employment to thousands of Poles and supplies the government with billions of euros in beer excise duty annually. In 2022, the excise rate on beer in Poland amounted to 9.43 zloty, an increase of 10 percent compared to the previous year. The excise duty on beer is forecast to reach over 12 zloty per one hectoliter for each Plato point in 2027.

The alcoholic brew also plays an important role in the life of a Polish person – over 40 percent of central European Slavs began drinking alcohol by consuming beer. Furthermore, in the last twenty years, the average beer consumption per capita almost doubled and amounted to 5.1 liters in 2020. In terms of regional consumption, the Mazowieckie (Masovian) and the Śląskie (Silesian) voivodeships gathered the biggest population of beer devotees. In 2020, the two regions had the highest sold value of beer in Poland, both accounting for 2.24 billion zloty.
Beer also remains the most popular type of alcohol consumed in every corner of the country. Regular beer drinkers often enjoy beverages produced in regional and craft breweries. It is important to note that over half of the Polish population does not consider beer to be alcohol. Still, year after year, Poles show their devotion to alcoholic lager as it continues to dominate national beer sales.

Another trend slowly but steadily emerges in this Slavic market - the popularity of alcohol-free beer has been rising, with the non-alcoholic beer market revenue amounting to 475 million U.S dollars in 2021. The beverage was more popular among men, whose consumption was 60 percent higher than that of women.
Polish consumers usually opt for the non-alcoholic beer option, especially when meeting up with friends, among other reasons. Moreover, the alcohol content of beer, in general, is systematically decreasing. One of the major reasons for that is the weather – longer summers result in numerous hot days, on which Polish consumers prefer lighter beverages. Taking these factors into consideration, non-alcoholic beer might become a strong market segment in the Slavic land of beer.

In the following 8 chapters, you will quickly find the 40 most important statistics relating to "Beer market in Poland". 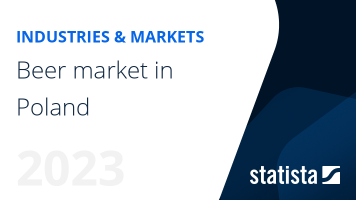 The most important key figures provide you with a compact summary of the topic of "Beer market in Poland" and take you straight to the corresponding statistics.