What do water, malted grains, hops, and yeast have in common? They are all ingredients of one of the most popular drinks in the world - beer. This fermented drink has become so beloved, that its production reached a volume of close to two billion hectoliters in 2019. Nearly half of it was manufactured in only five countries. Though China and the United States lead the market in terms of production, Latin American countries such as Mexico and Brazil are also considered among the top producers. Together, both nations brought close to 270 million hectoliters into the market that year. And it is not only supply where the region plays a key role. Out of the ten countries with the highest beer revenue, three are Latin American. In fact, by 2027, it was estimated that the market value of beer in Brazil and Mexico would be among the three largest, only behind the United States.

With these two nations among the leading beer-producing countries worldwide, and despite the seemingly large local demand, beer exports in Latin America and the Caribbean have exceeded its imports in recent years. Overall, the region experienced a trade surplus of more than three billion U.S. dollars in 2019, slightly below a year earlier, but more than two billion dollars higher than in 2016. When considering the most recent period, the beer trade surplus registered in the region is comparable with the value of Latin American beer exported solely to the United States, accounting for around 90 percent of the industry’s total exports, and making it its most important beer export partner. As a comparison, its second destination of beer exports - China - accounted for roughly two percent of the total.

As a result of the region's international presence, Latin American beer brands are among the mayor players in the industry. Anheuser-Busch InBev - one of the main beer corporations - for instance, is a parent company to the Brazilian Ambev, and the Mexican beer producer Grupo Modelo. Some of Anheuser-Busch InBev Latin American labels, including Grupo Modelo’s Corona and Ambev’s Brahma, are among the world’s most valued beer brands. In the region, some other top brands, such as Skol and Aguila, are also produced by the multinational. More locally consumed favorites include the Brazilian Antartica, the Colombian Poker, and the Peruvian beer Cristal – produced by a local firm.
This text provides general information. Statista assumes no liability for the information given being complete or correct. Due to varying update cycles, statistics can display more up-to-date data than referenced in the text.

Leading countries in beer production in the Americas 2021 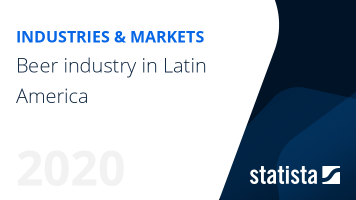