Published by
D. Tighe,
Nov 22, 2022
The holiday season in France is the start of a race against time to find the right gift idea and go shopping. In 2020, this task was made even more challenging by the COVID-19 health crisis, as many stores were not considered "essential" by the French government and therefore closed during lockdown.

The effects of the health crisis on Christmas purchases were visible in most European countries and around the world. The pandemic has indeed led to a decrease in net spending intentions, and in France, 44 percent of the population intended to spend less than the previous year during the same time.
Retail sales over the Christmas period were also expected to drop as a result of the lockdown measures, and compared to previous forecasts, France was expected to spend almost 12 billion British pounds less than originally planned.

Estimates suggested, however, that while in-store retailing would suffer over the Christmas period, online sales were expected to reach a record high in 2020. Between before and after the announcement of the lockdown, French buyer’s budget for online purchases had indeed increased by 21 euros, while the budget for in-store purchases reached 85 euros, compared to more than 200 euros in 2018. The majority of consumers were, in fact, expected to purchase their gifts on the internet.

While the end-of-year period is the most dynamic in terms of consumption, especially thanks to commercial events such as Black Friday, part of the French population has turned to second-hand gifts rather than new products.
A survey conducted in November 2020 showed that 75 percent of the French intended to purchase at least as many second-hand or refurbished toys and children's products for Christmas as they did the previous year. 21 percent would turn to these products more than in 2019. Giving second-hand gifts for Christmas could be an eco-friendly and economical solution for general over-consumption.

In the following 5 chapters, you will quickly find the 40 most important statistics relating to "Christmas gift shopping in France". 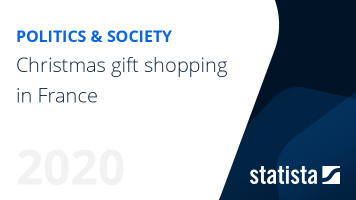 The most important key figures provide you with a compact summary of the topic of "Christmas gift shopping in France" and take you straight to the corresponding statistics.

Retail events in the UK