Published by
Sanyukta Kanwal,
May 31, 2022
One of the gravest health challenges that the world, including India, faces today in terms of communicable disease burden is Tuberculosis. This disease has been attributed with high costs to the Indian economy. According to an estimate by the WHO, India had the highest number of reported TB cases in the world. With advancements made in the field of medical and biotechnology, the country’s health care plans for treating tuberculosis have improved significantly. Yet, issues such as the recent exposure of TDR-TB (Totally Drug Resistant Tuberculosis) come with its own array of setbacks. TDR-TB cases allude to those patients who are resistant to all first-line and second-line drugs that are typically used to treat TB. This creates friction towards achieving the target of complete elimination of TB by 2030 under the global sustainable developmental goals.

Tuberculosis is caused by a specific bacterium called mycobacterium tuberculosis which primarily infects the air sacs and eventually the lungs, resulting in a compromised immune system. One of the major causes of TB occurring at elevated rates in the country can be attributed to air-pollution. In addition, India still being a developing country has a relatively lower standard of living compared to its other counterparts. Overcrowded homes, poorly built houses and inadequate infrastructure with poor ventilation is not uncommon. For instance, a high proportion of one-room dwellings in India directly correlates to higher TB rates. Further, poverty and lack of financial resources are linked to malnutrition, substance use and high incidences of HIV/ AIDS. Consequently, this results in immunosuppression among the population which increases the susceptibility of developing comorbidities.

The NTEP is a public health program under communicable disease initiated by the government with the aim of effectively organizing and managing its anti-tuberculosis efforts. It is classified as one of the leading public health initiatives under the National Health Mission (NHM) with a vision of achieving a “TB-free India” as soon as 2025. One of the reasons why TB incidence rates are still so high in India is due to the unaffordability of the treatment drugs prescribed. Despite governmental efforts made to increase access and availability of TB care across the country, the majority of the population receive sub-optimal levels of treatment, specifically, those patients diagnosed with drug-resistant TB. In general, these issues are attributable to high numbers of infectious diseases among the rural population and a national budget with a relatively low investment in healthcare, including urban and rural healthcare programs.

In the following 7 chapters, you will quickly find the 28 most important statistics relating to "Tuberculosis in India". 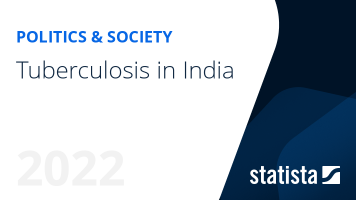 The most important key figures provide you with a compact summary of the topic of "Tuberculosis in India" and take you straight to the corresponding statistics.

Communicable diseases in the UK

Respiratory disease in the UK