Published by
Eloise Trenda,
Oct 1, 2021
Recognized for its savoir-faire regarding food and drink, France has a long history with alcohol production and consumption.
Social phenomena such as the “apéritif” (or “apéro”) can begin to explain how France earned its spot among the top ten countries with the highest alcohol consumption per capita. The apéritif consists of meeting friends or relatives to share drinks, usually alcoholic, and food, usually savory, in the late afternoon or early evening. Alcohol consumption is effectively a social event in France. In fact, the lockdown implemented to fight the coronavirus (COVID-19) epidemic in 2020 resulted in a significant decrease in alcohol sales in the country.

Regardless of the pandemic, the per capita consumption of alcoholic beverages in France has been significantly falling since the 1960s. A key indicator of this phenomenon is wine consumption, French people’s favorite alcoholic drink. Indeed, the population appears to have turned away from table wines in favor of higher quality wines in recent years. On the other hand, after an increase until the 1980s, then a decrease until 2010, beer consumption has lately risen again, mainly driven by craft beers and fruit-flavored beers. The increased value of the non-alcoholic beer market is further evidence of this shift in consumer preferences.

Another explanation behind this reduced consumption are the health risks associated with alcohol. For instance, cancer has been linked to alcohol consumption. On the other hand, many awareness campaigns have been carried out to warn against the dangers of drunk driving.
As a result, in France, the law limits the content of alcoholic beverage advertisements to their so-called "objective" elements (origin, description, method of consumption, etc.). Except in special cases, the law requires that advertisements include the preventive health message "L’abus d’alcool est dangereux pour la santé" - "Alcohol abuse is dangerous for your health".

In the following 5 chapters, you will quickly find the 45 most important statistics relating to "Alcohol consumption in France". 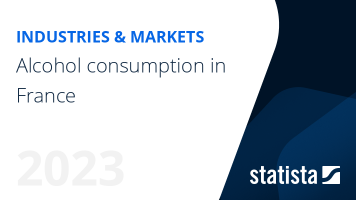 The most important key figures provide you with a compact summary of the topic of "Alcohol consumption in France" and take you straight to the corresponding statistics.