Published by Statista Research Department, Jun 7, 2022
As the COVID-19 pandemic continues to take its toll in all aspects of life, more individuals and businesses are seeking safe, dependable ways to access loans, credits, and governmental aid. This has caused the amount of financial technology (fintech) startups to grow worldwide in 2020, despite numbers being rather stagnate over the two previous years. Prior to the pandemic, Mexico and Brazil were the hot spots of Latin America’s fintech industry, housing over three hundred fintech startups each. However, the coronavirus crisis has also boosted these technological businesses in new and emerging markets. As of mid-2020, for instance, fintech was one of the top technology sectors in Peru believed by entrepreneurs to have benefited the most from the pandemic. And as each year passes, more Peruvian population hops on the fintech bandwagon, proving the South American country to be a fruitful market for the industry.

A young but promising industry

Fintech startups operating in Peru tend to adhere to a certain profile. To begin, they have mostly less than five years of operation. In addition, the majority of Peruvian fintech startups consist of no more than 10 employees, fitting to the idea of a young startup having a small and closely-knit team. Lastly, most of these nascent businesses have not surpassed the 10,000 Peruvian soles – or approximately 2,750 U.S. dollars – monthly revenue. Thus, despite being an emerging industry, the fact that fintech accounts for over seven percent of the country’s venture capital investments constitutes an acknowledgement of its potential within Peru’s financial market.

Even in countries like Peru, where cash is still the main payment method, the need for easy-to-use, digitally accessible, and reliable banking has perhaps never been more apparent, as under the current global circumstances. For this reason, not only have new digitally based companies emerged, but traditional banks have also been adjusting to the trend by investing in technology. A clear example can be seen when looking at Banco de Crédito del Peru’s mobile transaction app, Yape. Since its release, in 2017, the app has grown in popularity not only among general population, but also within small and medium-size enterprises (SMEs), which have found in Yape an alternative to traditional payment tools.

In the following 6 chapters, you will quickly find the 27 most important statistics relating to "Fintech in Peru". 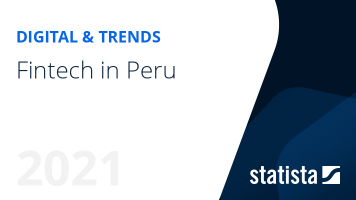 The most important key figures provide you with a compact summary of the topic of "Fintech in Peru" and take you straight to the corresponding statistics.