Sugar substitutes and sweeteners in the U.S. - statistics & facts

Published by
Nils-Gerrit Wunsch,
Feb 25, 2021
Sweeteners are one of the most used types of food additives. In the United States, sugar is the most popular among them. About 36 percent of consumers in the U.S. use sugar to sweeten their foods and beverages. However, increasing health concerns about their sugar intake have caused consumers to search for possible substitutes. Substitutes for sugar (sucrose) from beet and cane can take a wide variety of forms. The substitutes fall within two dimensions. They are either caloric or non-caloric and they are either naturally occurring or artificially produced.

In the following 5 chapters, you will quickly find the 27 most important statistics relating to "Sugar substitutes and sweeteners in the U.S.". 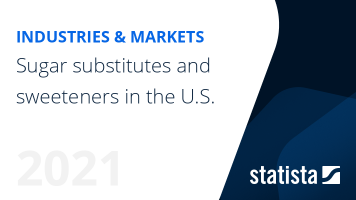 Go to report Sugar substitutes and sweeteners in the U.S.
Top Seller

Sugar tax and soft drinks in the United Kingdom (UK)

Sugar industry in the UK

Sugar confectionery market in the UK