Published by C. Textor, Nov 18, 2022
China is a country with very limited arable land for its size, but needs to feed the largest population on earth. Therefore, the Chinese government attaches great importance to agriculture. Although considerable amounts of agricultural land get lost to new infrastructure, industries, and urban settlements every year, the total output of agricultural products still sees slight increases. Notwithstanding, food imports grew dramatically over the last decade and today China is the largest importer of agricultural products in the world.

As food sovereignty is an important issue to the Chinese government, the production of grain crops has been strictly controlled and maintained to a high level to meet the basic nutritional needs of the population. However, mainly due to the rising living standards of the Chinese people, consumption patterns have shifted from a grain heavy diet to growing amounts of meat and other animal proteins, vegetables, fruits and nuts. Domestic production of these value-added products experienced the highest growth rates among all types of foodstuff.

This shift in food consumption is also reflected in Chinese agricultural imports. Value-added products such as meat, dairy products, fruits, and nuts have been imported in constantly growing volumes over the last years. In contrast, imports of bulk products slumped in 2016 and were highly affected by the Sino-U.S. trade dispute and the outbreak of the African swine fever thereafter. However, bulk imports have also rebound in 2020 and 2021, leading to an enormous boost in total agricultural imports.

The U.S.-China trade conflict had also a strong influence on the regional composition of imports. The share of U.S. products in total Chinese agricultural imports reached a record low of only around nine percent in 2019 but has nearly regained their former level in 2021. However, Brazil is still China’s largest trade partner and a direct competitor to U.S. agricultural products, while imports from South America and Europe have gradually gained market share over the last decade.

Due to its agricultural limitations and growing consumer demand, China’s food imports will most likely further increase in the future. Value-added food products have the largest growth potential, as median income levels are forecast to experience steady growth. However, competition among suppliers is strong and market participants need to adjust well to consumer preferences and market regulations to gain market share.

In the following 6 chapters, you will quickly find the 46 most important statistics relating to "Agriculture in China". 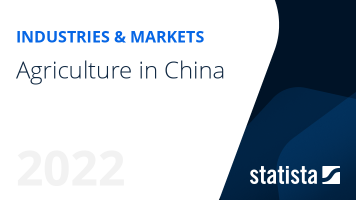 The most important key figures provide you with a compact summary of the topic of "Agriculture in China" and take you straight to the corresponding statistics. 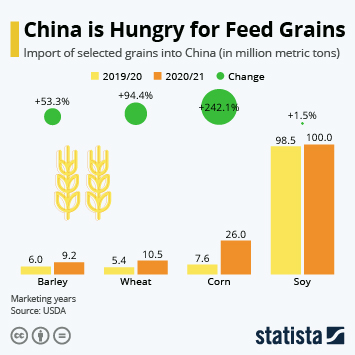