The American Red Cross estimates that someone in the United States needs blood every two seconds. However, only around three percent of age-eligible people donate blood yearly. Most blood in the United States is donated voluntarily from unpaid donors who donate for a variety of reasons, such as helping a friend or family member, being aware of the demand for blood, or due to social pressures.

There are eight major blood types: A+, A-, B+, B-, O+, O-, AB+, and AB-. Type O blood is the most demanded by hospitals for two reasons. The first is that it is the most common, with around 45 percent of the U.S. population having this type of blood. The second reason is that O negative blood can be transfused for any blood type. People with O negative blood are therefore referred to as universal donors. Just seven percent of the U.S. population has O negative blood, with this type slightly more common among white people.

In 2021, a survey of U.S. adults found that just 15 percent stated they had donated blood in the last 12 months. According to the most recent data from the CDC’s National Blood Collection and Utilization Survey (NBCUS), the largest survey of blood collection and utilization data in the United States, around 7.3 million people donated blood in 2019, with around 2.2 million of these people first-time donors. At that time, those aged 25 to 64 years accounted for 63 percent of donations, while those aged 16 to 18 accounted for 11 percent. In order to donate blood in the United States, each donor must complete a questionnaire, and each unit of blood is routinely screened to minimize the risk of transmitting disease. When an individual is deemed ineligible to donate blood because of health or safety concerns, it is known as a donor deferral. The most common reason for donor deferral in the United States is due to low hemoglobin/hematocrit.

Every day, blood that has been donated is transfused to save lives. Blood transfusions are one of the most common medical procedures in the United States, with donated blood used in surgery, helping cancer patients, and treating those with traumatic injuries or chronic illnesses. In 2019, there were almost 10.9 million blood transfusions in the United States. The majority of blood transfusions take place in inpatient medical settings, followed by critical care, and outpatient and non-acute inpatient settings, such as outpatient dialysis, rehabilitation, and long-term care. Although most patients do not experience any side effects from blood transfusions, adverse reactions can occur. In 2019, there were around 48,300 blood transfusion-associated adverse reactions in the United States. The most common was fever or chills, known as febrile non-hemolytic transfusion reaction, followed by mild to moderate allergic reactions.
This text provides general information. Statista assumes no liability for the information given being complete or correct. Due to varying update cycles, statistics can display more up-to-date data than referenced in the text.

John Elflein
Research expert covering health and health care
Get in touch with us now
Published by John Elflein, Sep 9, 2022

Most common blood type in the United States
O-positive

Distribution of blood types in the U.S. as of 2021

Number of whole blood and red blood cell units collected in the U.S. in 2019

Distribution of blood donations in the U.S. in 2019, by age

Blood transfusion-associated adverse reactions in the U.S. in 2017 and 2019 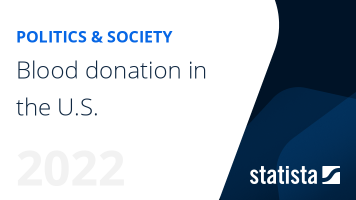 Go to report Blood donation in the U.S.
Top Seller

The most important key figures provide you with a compact summary of the topic of "Blood donation in the U.S." and take you straight to the corresponding statistics.