For those who want to start a do-it-yourself project to improve their home or give it a new style, the Home Depot might be considered a shopping paradise. Whether consumers prefer to buy in-store or online, the Home Depot offers a wide range of products such as appliances, building materials, hardware, indoor garden furniture, paint, kitchen, and bath decorating items, among other important products for home improvement projects.
With stores across North America, the company is the leading DIY and home improvement chain in the United States and Canada. By the end of the fiscal year 2021, Home Depot had generated over 151 billion U.S. dollars in revenue, and its revenue in the previous year placed it as the home improvement leader worldwide.

The Home Depot is an U.S. home improvement retailer whose first store opened over 40 years ago in Atlanta, Georgia. As of the beginning of 2022, the company had over 2,300 stores, with the United States being the retailer’s biggest market. In 2021, Home Depot’s brand was valued at nearly 53 billion U.S. dollars, competing with world famous names such as Walmart. In that same ranking, the company beat one of its main competitors, Lowe’s, by a significant amount.

Home Depot has been investing in its strategy to connect its stores online and bring the online experience to their stores. In short, the goal is to provide a two-way infrastructure, creating an omnichannel by connecting the online and in-store channels. As of 2021, the home improvement giant was among the top five leading e-commerce retailers in the United States, and the second leading online store in the furniture and appliances segment based on e-commerce net sales. The company offers approximately one million products on its online page, as well as DIY projects inspiration via the company’s blog.
This text provides general information. Statista assumes no liability for the information given being complete or correct. Due to varying update cycles, statistics can display more up-to-date data than referenced in the text.
Published by Statista Research Department, Sep 12, 2022 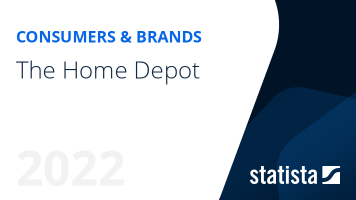 The most important key figures provide you with a compact summary of the topic of "The Home Depot" and take you straight to the corresponding statistics.