Published by
J. Clement,
Jul 26, 2022
Mobile gaming has become a driving force behind the rapid growth of the U.S. video gaming market. Previously considered a niche industry, mobile gaming has set in motion one of the most impactful (digital) gaming transformations of the past few decades. In 2020, mobile gaming revenue almost hit the 36-billion-dollar mark and accounted for the vast majority of video gaming revenue in the United States. The number of U.S. mobile video game users also reached a record 155 million in 2021, driven by a wave of technological advances, digital innovation, and nationwide lockdowns. As mobile adaption and smartphone usage continue to peak, gaming publishers focus on the mobile ecosystem more vigorously than ever, leaving no doubt that the mobile gaming phenomenon will continue to modify the U.S. gaming landscape and influence gaming behavior and engagement of millions of players across the country.

Fueled by nationwide coronavirus (COVID-19) lockdowns, the mobile gaming user penetration rate in the U.S. jumped from 41 percent in 2019 to 46.8 percent in 2021. Long before this surge in user count, the mobile gaming audience had become increasingly diverse with regard to age and gender. According to a recent survey, female players accounted for 51 percent of smartphone gamers in the U.S. in 2020, while they only made up 42 percent of PC and laptop gamers. As for mobile gaming age demographics, the same survey revealed that smartphone video games are particularly popular with players aged 20 to 39 years. Considering that children nowadays have increased access to (mobile) technology, it comes as no surprise that smartphones and tablets have also become preferred devices for playing video games among young children and teens in the United States.

Mobile gaming is one of the most popular smartphone activities in the United States, with roughly 39 percent of smartphone owners using their mobile devices for gaming at least once a week. As part of a 2021 survey on mobile gamer engagement, more than a third of respondents stated they played mobile games for one to five hours per week, while another eight percent reportedly did so for over 20 hours. Strategy, action, and casual games were among the preferred mobile gaming genres among tablet users in early 2021, while puzzle and casino games held the highest share of mobile gaming revenue. So what are mobile gamers playing and spending their money on? Candy Crush Saga regularly ranks as the top-grossing iPhone gaming app in the U.S., while Diablo Immportal topped the U.S. leaderboard in terms of downloads in summer 2022. As more publishers enter the mobile gaming scene by launching new gaming titles or reinventing established franchises for mobile, the mobile gaming revolution is unlikely to recede anytime soon.

In the following 6 chapters, you will quickly find the 45 most important statistics relating to "Mobile gaming habits in the United States".

The most important key figures provide you with a compact summary of the topic of "Mobile gaming habits in the United States" and take you straight to the corresponding statistics. 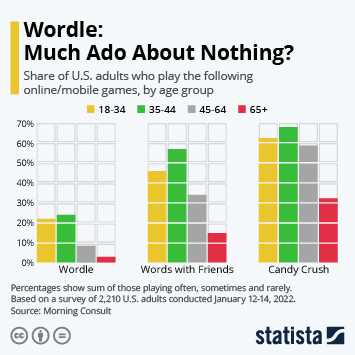 Usage of Wordle and other online games in the US