Published by
Tugba Sabanoglu,
Sep 14, 2022
Since Thierry Hermès opened the first Hermès factory in 1837, specializing in leather saddles and harnesses for horses, the family business has substantially expanded its product line. The brand is now prized for its ready-to-wear collections, perfumes, and handbags, and is the most trusted luxury brand by consumers worldwide.

In 2021, the company, headquartered in Paris, generated sales of approximately 8.9 billion euros. Over 45 percent of Hermès' revenue was generated by leather goods and saddlery products. In fact, Jean-Louis Dumas, head of the company until 2006, once said: "Our first customer is the horse; the second, the rider." In 2021, nearly half of the group's sales were generated in the Asia-Pacific region. This region represents Hermès' most important market, and the brand even created Shang Xia in 2010, specifically designed for the Chinese market. In 2021, Hermès employed more than 17,595 people worldwide, a number that has steadily increased since 2002, and owned outlets around the globe, with almost 40 stores in Japan and about 38 in the United States.

Hermès was the third most valuable luxury brand in the world in 2021, surpassed only by Louis Vuitton and Chanel. The LVMH group, of which Louis Vuitton is the most profitable brand, acquired about 17 percent of Hermès' capital in 2010, promising to respect the company's family management. Nevertheless, after several confrontations between the two market leaders, LVMH decided to end its financial stake in 2014. Today, Hermès is mostly owned by three families, heirs to founder Thierry Hermès, with Axel Dumas acting as managing director. In 2021, the company's cash flow amounted to just over three billion euros. Its worldwide investments reached a value of some 532 million euros, which represents an increase compared to the past two years.

Hermes' most popular products are primarily luxury travel bags like the Birkin and Kelly models, named after the famous actresses Jane Birkin and Grace Kelly. As investment pieces, Hermès handbags are also a profitable purchase, yielding around an average 26.7 percent premium on their original retail price. In addition, Hermès is known for its silk scarves. Although its activities have greatly diversified since the 19th century, the group maintains its connection to its roots in the equestrian world, creating the "Saut Hermès", a jumping competition held at the Grand Palais in Paris.

In the following 5 chapters, you will quickly find the 33 most important statistics relating to "Hermès and the luxury market". 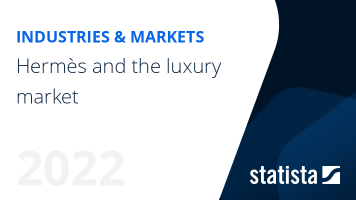 Go to report Hermès and the luxury market
Top Seller

The most important key figures provide you with a compact summary of the topic of "Hermès and the luxury market" and take you straight to the corresponding statistics.