The most consumed meat worldwide is pork, which is the culinary name for domesticated pig meat. Pork comes in many forms, such as ham, bacon, or sausage, and can be eaten both freshly cooked and cured. In 2022, global pork production was led by China, which produced over 51 million metric tons of pork in that year. The European Union and the United States held the second and third positions, respectively.

Pork production in the U.S.

To account for the global demand of pork products, the U.S. was home to approximately 72 million hogs and pigs as of 2022. That year, Iowa was the state with the highest inventory, resulting in approximately 23 million hogs and pigs. This was followed far behind by Minnesota, which held a little over a third of what Iowa held that year. Pork production in the U.S. has generally increased since the 2000s. In 2021, the U.S. produced about 27.7 billion pounds of commercial pork.

U.S. pork exports have generally increased since 2007, and in 2021 the total carcass weight of pork exports exceeded seven billion pounds. In the last decade, the U.S. exported more pork and pork products than it imported. In 2021, the import of pork products to the U.S. significantly increased from the year before and was valued at 1.57 billion U.S. dollars. Domestically, pork still remains a popular food item. The retail sales of fresh pork in the U.S. fell behind fresh poultry and beef in 2021, generating 7.1 billion U.S. dollars. The cut of pork with the highest sales share in the U.S. was pork loin, which accounted for almost 50 percent of all sales.

Consumption of pork in the U.S.

The per capita consumption of pork has remained relatively unchanged in the United States. Pork consumption in the U.S. is forecast to reach 52 pounds by 2031, up from 49.9 pounds in 2015. Pork chops are the most frequently purchased cut of pork, with almost 70 percent of consumers reporting that they purchase it regularly. In another recent survey, the most important purchasing factor of pork for consumers was that it was made in the U.S., which largely outranked other purchasing factors.
This text provides general information. Statista assumes no liability for the information given being complete or correct. Due to varying update cycles, statistics can display more up-to-date data than referenced in the text.

Retail sales of processed meat in the U.S.
27.1bn USD

Major U.S. meat and poultry companies 2021, based on sales 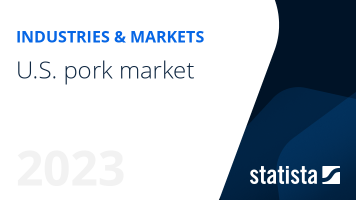 Go to report Pork market in the U.S.
Top Seller

The most important key figures provide you with a compact summary of the topic of "Pork market in the U.S." and take you straight to the corresponding statistics.