Published by Statista Research Department, Mar 25, 2021
In January 2020, Google announced that starting in 2022, its browser Chrome would no longer accept third-party marketing cookies. These cookies collect demographic information about internet users, such as age, gender, product preference, and information on previous searches. Such data is then used to target consumers with digital ads tailored to their cookie profile. Chrome is not, however, the first browser to take a stand against third-party cookies. Mozilla’s Firefox started work on limiting the power of cookies back in 2013, and Apple’s browser Safari began preventing user tracking by limiting cookie use in 2017. Chrome’s move will have the farthest-reaching consequences, as the browser holds nearly two-thirds of the global browser market.

According to Google’s vision, consumers will be the primary beneficiaries of the transition, as their personal data will no longer be collected, processed, used, and possibly also traded by a myriad of companies across the globe. However, U.S. marketers do not share this view; two thirds of surveyed industry experts believe that the changes will not improve consumers’ control over their data, and over 50 percent think that privacy concerns will persist. Additionally, organizations skeptical of Google’s move argue that Google aims to conquer an even larger market share under the new cookieless conditions, as the search giant has access to consumer data from sources unavailable to its competitors.

First and foremost, advertisers will lose. Without tracking, online ads will not be able to reach their target audience as well as they did before, and sales revenues, especially in the e-commerce sector, will suffer. This development will likely lead to a decrease in digital advertising spending, not only because decreasing revenues often cause reduced spending in general but also because advertisers might decide to cut down on digital advertising in favor of more effective media formats. In addition, lower ad spending can negatively affect online publishers whose existence depends on ad revenues. As third-party cookies are the base for programmatic advertising, around which an entire ad tech subsector was built, vendors of supply-side and demand-side platforms, ad exchanges, and data management platforms will also experience a drop in earnings. Finally, consumers might also be considered losers as their online browsing experience will become less personalized and thus less relevant without targeted ads.

What is the advertising industry doing about it?

Unsurprisingly, cookie deprecation was voted the top digital media challenge of 2021. In mid-2020, a majority of U.S. marketers relied on third-party cookies in their digital advertising activities. However, significant efforts are being made to replace third-party cookies with other identity tracking solutions. Most U.S. marketers believe that an email address could serve the same purpose, while other alternatives include first-party publisher data and a universal ID attributed to every internet user. When asked how long it would take to shift to a different identity tracking solution, two thirds of respondents were anticipating it would be at least a year. These efforts attracted four billion U.S. dollars in spending in the United States, and expenditure is forecast to more than double by 2024. In comparison, providing third-party audience data is a 20-billion-dollar industry.

The most important key figures provide you with a compact summary of the topic of "Third-party cookie deprecation" and take you straight to the corresponding statistics.

Data usage in marketing and advertising 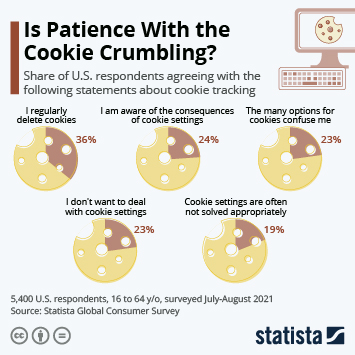