Published by
T. Ozbun,
May 5, 2022
Since 2010, the dairy industry in Italy saw a consistent increase in its total revenue. The annual revenue of the Italian dairy industry was approximately 15.6 billion euros that year. By 2018, however, this figure increased to almost 20 billion euros. While both cheese and ice cream are popular food items in Italy, the the dairy category with a production majority in Italy is liquid milk.

Within Italy, Lombary is the leading region of milk deliveries. The region consistently accounts for more than 40 percent of all milk deliveries. This is followed by Emilia-Romagna, which delivers almost a third of the milk amount which Lombary does. In recent years, however, the volume of milk produced in Italy saw a decrease. Most notably was 2019, where the production volume that year decreased significantly by more than 300 thousand tons compared to the previous year.

In addition to the decrease of milk production in Italy, the country also reported a decrease in milk imports. In 2010, the annual volume of semi-skimmed milk imported to Italy was approximately 41 thousand tons, but dropped to only 13 thousand tons in 2018. During that time, other milk varieties such as whole milk and skimmed milk, also observed this decrease. Surprisingly, fermented milk imports and condensed milk imports to Italy increased during this period of consideration. In 2019, Germany was the leading exporter of condensed milk to Italy.

Consumption of milk in Italy

While fermented and condensed milk imports have increased, the consumption of these products within Italy have not. This could be partially due to the rise of speciality diets (such as veganism) worldwide. The consumption of fermented milk products in Italy saw a 5-year low as of 2019. In Italy, the majority of dairy product purchases are cheese and yogurts. Combined, these two items accounted for more than three quarters of all domestic expenditure on dairy products.

In the following 4 chapters, you will quickly find the 30 most important statistics relating to "Milk industry in Italy". 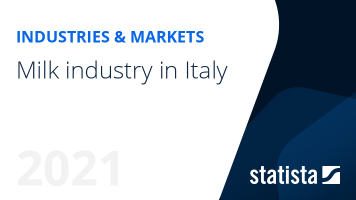 The most important key figures provide you with a compact summary of the topic of "Milk industry in Italy" and take you straight to the corresponding statistics.

Milk market in the UK