Published by J. Clausnitzer, Jul 26, 2021
Mobile phones have become a vital part of our everyday lives. Today’s smartphones have a wide array of functions, making people increasingly connected to the world of digital information. Finland, once a global leader in mobile telephony with Nokia, has a strong history with mobile communications. The first GSM call over a commercial network was made in Finland in 1991 and nationwide mobile networks were built early on. High-speed connections are also available in rural areas, and the 5G network coverage is quickly expanding in the country.
For a population of 5.5 million, there were nearly 9.3 million mobile subscriptions in Finland as of 2020. Household subscriptions amounted to roughly 6.8 million, more than one subscription per capita. While the number of mobile subscriptions has remained relatively stable during the past decade, smartphone usage has grown steadily in Finland. Based on survey data, 96 percent of Finns owned a smartphone in 2020. Smartphone ownership reached almost 100 percent in younger age groups, whereas 88 percent of people aged 65 to 74 years had a smartphone. The most popular brands among Finnish consumers are Apple and Samsung, followed by Huawei. In terms of operating systems, Android held a leading position on the market with 71.5 percent in 2020, clearly ahead of Apple's iOS.

When it comes to mobile internet usage, Finland is in a league of its own with high monthly data consumption per person. The reason behind this is that Finnish operators currently only sell unlimited data plans. In comparison to the other Nordic countries, unlimited mobile data usage was significantly more prevalent in Finland. As mobile data usage is not restricted, monthly plans are offered with faster connection speed options. According to a survey from 2020, the internet was most commonly accessed with a smartphone, and most people were fine with using mobile internet only.

Although today’s smartphones are equipped with multiple useful functions and apps, communicating with others remains important for people using mobile phones. 95 percent of Finns made standard phone calls or sent text messages weekly based on the 2020 survey results. Instant messaging was used by nearly 90 percent of Finns, however, this figure was noticeably higher among younger age groups. Correspondingly, messaging and social media were also considered to be the most important application categories among mobile phone users in Finland. In fact, 98 percent of WhatsApp users and 93 percent of Instagram users in Finland accessed the app on a mobile phone in 2019.

In the following 4 chapters, you will quickly find the 25 most important statistics relating to "Mobile phone usage in Finland". 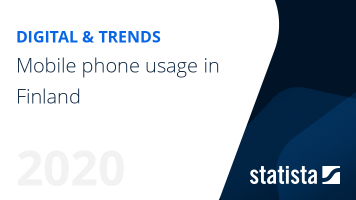 The most important key figures provide you with a compact summary of the topic of "Mobile phone usage in Finland" and take you straight to the corresponding statistics.

Mobile devices in the Nordics