Published by Teresa Romero, Aug 29, 2022
The Gross Domestic Product (GDP) is one of the most frequently used economic indicators that measures the size of a country’s economy through its production in a given amount of time, usually a year. The GDP comprises all goods and services produced within the national borders regardless of their purpose. It aggregates all private and public consumption, investment, government expenditure and net exports.
In 2021, Spain’s GDP stood at 1,203 billion euros, compared to the previous year this indicates an increase of 81 billion euros and recovers the positive trend that has been observed since 2013, only interrupted in 2020. According to this indicator, Spain is the 15th largest economy in the world. Since the GDP is not adjusted for a country’s population size, GDP per capita is better suited for country to country comparisons. Spain’s GDP per capita reached 30,090 US dollars in 2021, and indicates a tumble from the top ranking, far from the value registered in the economies with the largest GDP per capita, such as Luxembourg and Ireland.

Breaking down the gross domestic product into sectors and regions provides a more concise picture of the Spanish economy. In the Community of Madrid and the Basque Country, the GDP per capita is approximately 80 percent higher than that of Andalusia and the Canary Islands. Except for the Community of Madrid, all the autonomous communities whose GDP per capita was above the national average were located in the North. Furthermore, Andalusia, Extremadura, and Castile - La Mancha are the regions where the primary sector represented the largest share of the GDP, with a share of 7.1, 8.8, and 9.4 percent, respectively. Despite the progressive downturn in the secondary sector, the industrial activity still accounts for a considerable share of the regional GDP in Navarra, La Rioja and the Basque Country.

Unlike agriculture and industry, the GDP share of the services sector has been on the rise in recent decades. The tourism and travel sector has become one of the main engines of the of the Spanish economy. In the mid-2010s, travel and tourism’s annual contribution to the national economy exceeded 110 million euros, and made Spain one of the Western countries with the largest GDP share of the tourism sector. With the outbreak of the COVID-19 pandemic, tourism collapsed, and the Mediterranean country's economy was badly affected. The Bank of Spain estimated that the Spanish GDP fell between 10.7 and 11.6 percent on 2020, thus exceeding any fall experienced by the GDP during the Great Recession in Spain (2008-2014). Despite the remarkable recovery forecasted for 2021, the impact of the pandemic on the Spanish economy will hinder the country's economic growth in the coming years. The tourism sector recovered slightly in 2021, was still far from the pre-pandemic levels of significance, which are not forecast to be reached until 2024.

In the following 4 chapters, you will quickly find the 30 most important statistics relating to "GDP in Spain". 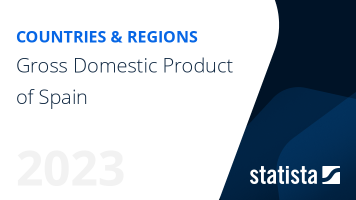 The most important key figures provide you with a compact summary of the topic of "GDP in Spain" and take you straight to the corresponding statistics.

Travel and tourism in Spain