Russia was the eleventh largest economy in the world in 2021, with its gross domestic product measured at 1.78 trillion U.S. dollars. In the global ranking by nominal GDP, Russia was positioned between South Korea and Australia. At approximately 11.1 thousand U.S. dollars, the average wealth per capita in Russia was lower than in other European countries in 2020. Furthermore, inequality was observed in the society, as nearly 47 percent of the total income was accumulated by the richest 20 percent in 2021, compared to five percent by the poorest one fifth.

The impact of the war in Ukraine on the Russian economy

As a consequence of the Russian invasion of Ukraine that started in February 2022, the Russian economy was forecast to drop by 11.2 percent in 2022. The sanctions imposed by Western countries on Russia have led to disruptions to trade flows of Russia's key export and import commodities, such as fossil fuels, technology, and equipment. Thus, the country's economic sectors had to prioritize import substitution and explore other trade partners. For example, import dependence in retail and telecommunications was expected to create additional risks to the these industries' resilience. The sanctions have also contributed to inflation in Russia, which was forecast at nearly 20 percent in 2022. As hundreds of international companies halted activities in Russia in response to the war, their staff faced risks of unemployment. In the food industry alone, the number of employees in largest companies that suspended operations in Russia was measured at 136 thousand.

Energy sector is crucial to the Russian economy

Having the largest natural resources value worldwide, Russia was highly dependent on its energy industry. The country was among the leading oil, gas, coal, and steel producers. Coke and refined petroleum products had the highest worth among manufacturing segments. Furthermore, earnings from foreign sales of energy commodities were a major contributor to Russia's federal budget, as mineral products occupied 56 percent of total exports. Therefore, energy import bans from Russia were included in sanction packages of several Western countries due to the war in Ukraine. For example, the United States prohibited imports of oil, liquefied natural gas (LNG), and coal from Russia, while the EU banned Russian coal and seaborne oil shipments. While some sanctions are yet to enter into force, Russia's seaborne crude oil exports to Europe were reduced over the first half of 2022, while the shipments to Asia significantly increased.
This text provides general information. Statista assumes no liability for the information given being complete or correct. Due to varying update cycles, statistics can display more up-to-date data than referenced in the text.
Published by Statista Research Department, Nov 28, 2022 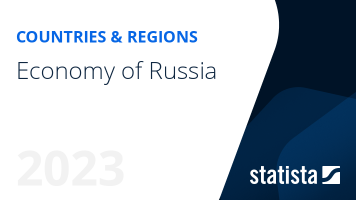 The most important key figures provide you with a compact summary of the topic of "Economy of Russia" and take you straight to the corresponding statistics.