Published by Emma Bedford, Nov 17, 2022
Sweets still play a significant role in Spain. In fact, Spanish confectionery revenue exceeded 5.8 billion euros and the industry employed more than 57,000 people in 2019. Confectionery includes such products as chocolate, pastries, and cookies. While baked goods generate the highest sales volume in confectionery, the chocolate sales value represented more than 30 percent of the total revenue of the confectionery industry in Spain.

Chocolate sales value in Spain amounted to more than 1.5 billion euros in 2019. Broadly speaking, its fame is indisputable, with leading industry companies such as Ferrero, Mondelez, or Lacasa enjoying popularity among consumers based on their chocolate products. Despite the increased awareness of the importance of eating healthy and that sugar and chocolate are counterproductive to it, chocolate consumption has not decreased in Spain. On the contrary, the chocolate consumption volume in the last decade. Without going any further, in 2019, Spanish households consumed more than 162 million kilos of chocolate.

Candies are not the dominant product in the Spanish confectionery industry. All the same, this sweet has a special importance on the market, as Spain is one of the leading producers worldwide. Candies were among the most exported confectionery products in Spain. Candy production has a long tradition in Spain, with familiar products such as Chupa Chups. The company, founded in Asturias in the mid-20th century, invented a candy on a stick that conquered consumers around the world. In 2019, Chupa Chups sales value in Spain exceeded 95 million euros. It is also worth mentioning other leading confectionery companies such as Golosinas Fini and Vidal, both candy producers based in the Molina del Segura (Murcia).

In the following 5 chapters, you will quickly find the 32 most important statistics relating to "Confectionery in Spain". 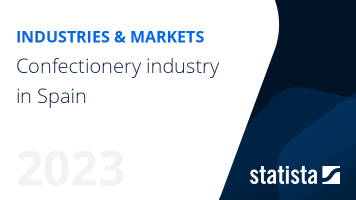 The most important key figures provide you with a compact summary of the topic of "Confectionery in Spain" and take you straight to the corresponding statistics.

Confectionery industry in the U.S.

Sugar confectionery market in the UK