Published by
Alexandru Arba,
Jun 7, 2022
The restaurant industry is a subsegment of the foodservice industry, which is an important segment of the service sector. The restaurant industry in Japan generates annual revenues amounting to trillions of Japanese yen while providing work for millions of people. Restaurants in Japan offer a wide array of dishes that cater to different budgets and tastes, resulting in a highly diverse culinary landscape. Next to dining places that offer typical Japanese dishes, such as sushi, soba, and udon, restaurants offering Western-style food, such as hamburgers and ethnic European cuisine, have firmly occupied a position in people’s dining out habits. The advent of the COVID-19 pandemic had adverse effects on the restaurant industry, forcing it into a slump. In almost all segments, revenues declined significantly, with the market size of drinking establishments recording the largest contraction.

There are well over one million restaurant facilities in Japan, owned or run by tens of thousands of businesses. The high demand in Japanese society for restaurant food and consumption at restaurants offers great possibilities for businesses, but it is also a reason for the high competitiveness of the restaurant industry. This is a defining characteristic, shaping the restaurant industry's landscape. It manifests itself, for example, through efforts of companies to differentiate themselves through price, food quality, and overall convenience, among other means, often resulting in tight profit margins and unfavorable working conditions for employees. For instance, the opening hours of shops (in metropolitan areas) are typically long, and many chain restaurants that offer casual dining are open around the clock. The high competition might also be the reason for priceworthy dining experiences for consumers at the lower spectrum of the price range, and low wages earned by employees, many of whom work in part-time or temporary positions. Another characteristic of the industry is that a good deal of its market share is owned by a handful of companies. A possible consequence is that new industry players and small businesses face an uphill battle in terms of survivability. The market is mainly dominated by domestic companies, with Zensho Holdings occupying the first position regarding annual revenues.

Culture of dining out

Dining out is common in Japan, especially in metropolitan areas, which provide an abundance of options for consumers. Enjoying the local gastronomy is, to a certain extent, part of the work-life culture, as visiting izakaya (pub dining restaurants) is a common way in some corporations to socialize with colleagues. Reportedly, a good amount of business deals and political decisions are made in izakaya and ryotei (high-end entertainment restaurants) while practicing nomunication (a compound word formed from the Japanese verb nomu which means to drink, and the English word communication). Even during the COVID-19 pandemic, around half of the population aged 20 and older used restaurants at least once per week. The rate and frequency of utilization vary across demographic layers. In general, figures show men eating more often out than women, while the frequentation rate of restaurants drops with increasing age. The most common setting for eating out is with family members, as well as with friends and acquaintances, showing that dining out is often used as an opportunity for social interaction. Sushi and ramen restaurants are among the most chosen types of restaurants when dining out.

In the following 6 chapters, you will quickly find the 37 most important statistics relating to "Restaurant industry in Japan".

The most important key figures provide you with a compact summary of the topic of "Restaurant industry in Japan" and take you straight to the corresponding statistics. 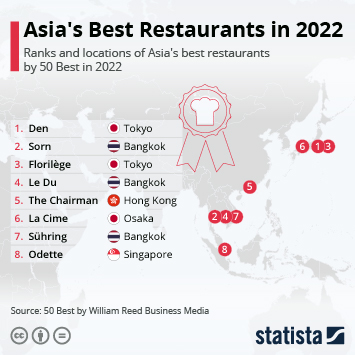