Published by
Adriana Sas,
Nov 24, 2022
The pandemic affected the turnover of the food market in Poland and changed consumer habits. The importance of shopping in hypermarkets has declined in favor of supermarkets and discounters. Sales of products in online stores have also increased significantly. It may take a long time for malls to return to pre-pandemic COVID-19 performance.

The Polish FMCG market was worth 201 billion zloty in 2021, the value of which was predominantly influenced by food. More than a dozen retail chains are operating in the retail market. The most popular brands include Biedronka, Lidl, Auchan, Kaufland, Carrefour, or Dino (a chain of stores with Polish capital). The number of franchise stores is increasing. Eurocash Group, which operates both in the wholesale and retail segments, dominates in this field. Since 2002, the number of franchised stores grew by over 648 percent. The most popular franchise chains in Poland include Żabka, Sklep Polski, abc, Lewiatan, and Delikatesy Centrum.

In terms of revenue and number of stores, the market leader is Biedronka, owned by the Portuguese company Jeronimo Martins. In 2020, Biedronka's sales amounted to 61.3 billion zloty. This is nearly three times as much as Lidl and more than five times as much as the Auchan chain. Biedronka had more than 3.2 thousand stores across Poland, becoming the brand with the most developed network. In contrast, Lidl had 800 outlets across the country in 2021.

Closed shopping malls, the deterioration of household finances, the fear of losing one's job, and the increasing digitalization have changed the shopping behavior of Poles. Household spending on groceries increased during the pandemic. Especially in its initial phase, most consumers stockpiled groceries for fear of running out of them in the market. Consumers became increasingly concerned about household finances. Every fourth Pole paid attention to the price of products and services more often than before the pandemic. Saving, which used to be more of a phenomenon in the past, became essential.

Changing habits have had an impact on shoppers' visits to retail stores. Every third Pole started to buy more food in local stores, and every fifth Pole in hypermarkets and supermarkets. Every fifth also began to use online stores more often. Trade restrictions, limited access to products, and fear of contracting COVID-19 have led to increased self-sufficiency among Polish consumers. They have begun preparing products such as bread, cakes, cheese, preserves, and growing vegetables and herbs on their own. However, it is difficult to say whether these consumer behaviors will lose their importance after the pandemic or stay longer in Poland.

In the following 7 chapters, you will quickly find the 76 most important statistics relating to "Retail market in Poland". 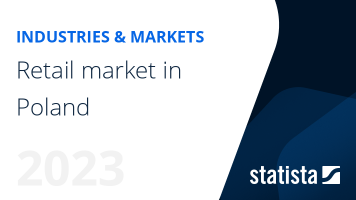 The most important key figures provide you with a compact summary of the topic of "Retail market in Poland" and take you straight to the corresponding statistics.