Published by Statista Research Department, Sep 12, 2022
During the last two years, homeowners spent more time and money on home improvement projects than ever before. The main reason for this was the coronavirus (COVID-19) pandemic. As social life was restricted during several lockdown periods, people had more time on their hands; time they could spend on a long-postponed project. In fact, "finally having the time for it" was the number one reason for home improvement in the United States. Aside from the pandemic, the rising real estate prices in many Western countries were a likely contributing factor to the increase in home improvement projects. With real estate price changes outperforming wage increases, homeowners may have opted for upgrading their homes instead of purchasing a new house.

In the United States, garden landscaping was the most frequently undertaken home improvement project in 2020. Meanwhile, European homeowners seemed to have different priorities regarding their house upkeep. In France, for instance, the main focus was on home decoration, whereas putting in a new bathroom was the most popular project in the UK. The global home improvement craze had a profound effect on the DIY retail market. In fact, the U.S. home improvement market size increased by more than 12 percent in 2020, the largest year-over-year increase in the last decade.

Although traditional home improvement renovations such as bathroom and kitchen remodeling were the most frequently conducted projects during the pandemic, high-tech home solutions also increased in popularity. Installing features such as high-speed internet and security cameras was done almost as frequently as garden landscaping and indoor painting in the U.S.. This points towards a major trend in home improvement: the smart home. Using interconnected devices and appliances to automate the way a home functions, the number of smart homes is forecast to reach nearly 500 million by 2025. As of 2020, a significant portion of American kitchens is already equipped with wireless controls, touchscreen displays, or built-in apps. Other smart home items include smart speakers, camera doorbells, and voice-controlled devices.

In the following 5 chapters, you will quickly find the 28 most important statistics relating to "Home improvement projects". 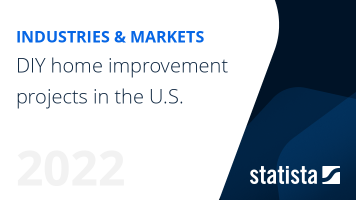 The most important key figures provide you with a compact summary of the topic of "Home improvement projects" and take you straight to the corresponding statistics.

DIY and home improvement in the U.S.

DIY and home improvement in Europe

DIY and home improvement market in the UK