Published by
Christina Gough,
May 11, 2021
eSports, which stands for electronic sports, refers to video game tournaments that are played by amateur or professional gamers at regional or international level. Competitions can be played by individual gamers or as teams, and events are often streamed live over the internet, attracting a large number of viewers. In recent years, the eSports market in Europe has grown rapidly and this growth is forecast to continue. Many different types of video games are played in eSports tournaments. Some of the most popular games include League of Legends, a multiplayer online battle arena game, and Call of Duty: Warzone, a multiplayer battle royale game. Many video game developers are now designing games with eSports in mind, incorporating tournament capabilities in their games or providing funding for gaming events.

Most popular countries for eSports in Europe

Professional gamers who play eSports can win large sums of money at competitions, and while eSports are not as popular in Europe as they are in North America and China, European eSports players earned a fair amount of winnings in 2020. France was the European country with the highest amount of eSports prize money won that year, with a total of nearly four and a half million U.S. dollars in winnings. However, while France brought in the most money in tournament winnings, Spain and Italy were by far the European countries with the highest share of eSports viewers in 2020.

In addition to watching livestreams of tournaments online, eSports fans can purchase merchandise related to their favorite games, professional gamers, and teams. This includes not only physical merchandise, but also digital content such as skins, banners, and content passes. Team-specific digital merchandise such as these were the most popular type of eSports products purchased by European fans in 2020. The European countries that spent the most money on eSports in 2020 were Spain, Italy, and France, with about 60 percent of eSports fans in each country spending money on the hobby that year.

European eSports fans made up about 16 percent of the frequent viewers and enthusiasts of eSports worldwide in 2020. eSports viewers can be broken down into enthusiasts who watch eSports more than once a month, and occasional viewers who watch eSports less than once a month. When looking at the breakdown of eSports viewers by interest level in Europe, there were nearly double the number of occasional viewers as eSports enthusiasts in 2020. Though 2020 saw the onset of the coronavirus (COVID-19) pandemic, which severely impacted traditional professional sports across the globe, the eSports market was not as strongly affected due to tournaments being held primarily online. In fact, most European countries saw an increase in eSports viewership in Europe during the COVID-19 pandemic, with only a small portion of fans spending less time watching eSports that year.

In the following 4 chapters, you will quickly find the 25 most important statistics relating to "eSports in Europe".

The most important key figures provide you with a compact summary of the topic of "eSports in Europe" and take you straight to the corresponding statistics.

eSports and online gaming in Sweden 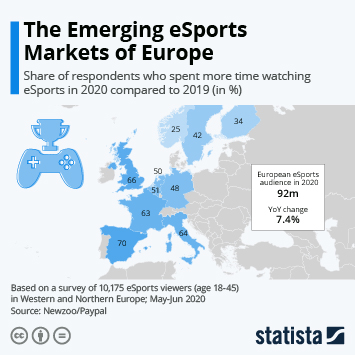