Small appliances can be divided into two broader product segments: small kitchen appliances and small home environment and personal care appliances.
The small kitchen appliances segment includes small-scale cooking devices, such as toasters, mixers, coffee machines, grills and roasters, and microwaves. Ownership of small cooking appliances varies from country to country as they are often profoundly tied with cultural norms. Whereas household ownership of coffee machines exceeds 80 percent in many European countries, they are not as common in many Asian countries with ownership rates closer to 30 percent. Conversely, sales of electric rice cookers are more common in Asia. Retailers sold 5.5 million rice cookers in Japan during 2019 and 4.47 million rice cookers in the United States, despite the difference in population size of approximately 200 million people.
The other part of the small appliances industry includes irons, appliances to maintain a clean personal environment, and personal care appliances like hairdryers. The largest product category in the segment is vacuum cleaners.

The leading companies in the industry include the French-based SEB Group, the Italian home appliance company De'Longhi, the Breville Group from France, and the US-based Hamilton Beach Brands. These companies are primarily focused on small appliances in their product line.
While the SEB Group has a broad offering of various small appliance categories, other companies focus on specific products. One example is De'Longhi, which generates around 50 percent of its revenue from its coffee segment.
Other manufacturers also form part of the market, despite being primarily focused on major appliances. One example is GREE Electric Appliances from China, which generated around 700 million U.S. dollars in revenue from its small appliances segment in 2020, accounting for less than five percent of GREE Electric's total revenue.

In the following 4 chapters, you will quickly find the 26 most important statistics relating to "Small home appliances". 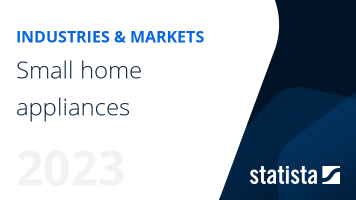 The most important key figures provide you with a compact summary of the topic of "Small home appliances" and take you straight to the corresponding statistics.