When it comes to video games, Mexico and Brazil undoubtedly rule the Latin American market. However, other economies are discreetly joining the competition. One of these is Colombia, which in 2020 had the fourth highest gaming revenue in the region, directly behind Argentina and ahead of Chile. Among the fastest growing segments in the country is mobile gaming. Accessible anywhere, and easy to pick up and put down, both adept gamers as well as regular smartphone and tablet users have developed a taste for playing on smaller screens. Although the popularity of mobile games had already been growing in recent years, the COVID-19 pandemic acted as a catalyst to reinforce their adoption, also driving other trends such as the consumption of online collaborative games.

Mobile devices have democratized a wide range of activities, including gaming. During the first half of 2020, and despite staying at home for months due to long-lasting movement restrictions, Colombians turned mainly to their smartphones when playing digital games, even more so than PCs or consoles. By the end of that year, the number of mobile gamers in the country was estimated at nearly 8.7 million, a figure that, according to forecasts, is set to reach 11 million by 2025. Far from being a mere alternative, on-the-go leisure is becoming an increasingly important part of gamers' daily lives. During a survey conducted in the midst of the health crisis in Colombia, more than 50 percent of respondents said they spent 40 minutes or more a day on mobile games.

Bye bye offline, the rule of the day is sharing

In recent years, the gaming experience has moved by leaps and bounds into cyberspace, with a large share of gamers often investing additional resources in online products such as subscriptions, game downloads and in-game purchases to raise their game. Nowadays, however, video game lovers do not only actively engage in this online activity, but also passively, for instance following their favorite gamers on social media or watching live stream events from the comfort of their couch. Streaming services such as Twitch have allowed millions of Colombians to follow some of the major gaming tournaments and leagues worldwide, such as the renowned League of Legends. In fact, the popularity of the latter has recently skyrocketed in the South American country. Colombia's own League of Legends (LoL) tournament, the 'Golden League', saw its audience grow by almost four times in one year, going from about 80,000 viewers in 2019 to 300,000 in 2020. This competition has become one of the main eSports events nationwide.
This text provides general information. Statista assumes no liability for the information given being complete or correct. Due to varying update cycles, statistics can display more up-to-date data than referenced in the text.
Published by Statista Research Department, Oct 18, 2022

Growth in gaming console sales vs. before the COVID-19 lockdown
16% 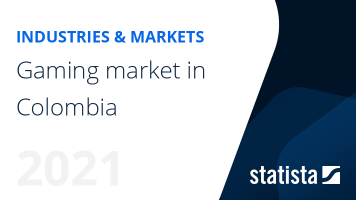 The most important key figures provide you with a compact summary of the topic of "Gaming market in Colombia" and take you straight to the corresponding statistics.