One of the most popular clichés about France is the distinctive style of dress of its population. Fashion represents a strong economic and cultural stake for France, and is a strategic and symbolic sector for the country, with international influence. Paris has indeed been the world capital of fashion for a long time, and remains a major location in a context of international competition.

A market affected by the crisis

Strongly affected by the COVID-19 (coronavirus) crisis, the clothing and accessories market experienced a sharp decline in terms of revenue in 2020, in France and internationally. Between January and July 2020, the French apparel and textile market had lost more than 21 percent of its value compared to the same period the previous year. The category most affected by containment and store closures was swimwear: the women's swimwear segment had lost more than 28 percent of its value, while the decline in the value of men's swimwear sales reached almost 30 percent.
However, the crisis seems to have benefited fashion e-commerce. With an apparel market value of 34.4 billion U.S. dollars in 2020, fashion was the highest revenue generating segment. Fashion items were the leading category among online shoppers in 2020, and apps dedicated to selling and buying clothes were among the most popular: in April 2021, the Vinted.com platform had been downloaded 366,000 times on Google Play Store, and 146,000 on Apple App Store.

The crisis has also contributed to making the environmental and social impacts of fashion - and particularly of fast fashion - more perceptible to the French. The fashion industry is indeed one of the most polluting: the fact that it is "fast" actually implies an overproduction of clothing, which contributes to major environmental problems, such as textile waste,carbon emissions, or overconsumption of water and electricity. In France, the amount of textile waste generated per capita was over three kilograms in 2016. Some consumers are gradually turning to more responsible alternatives: in 2019, more than a quarter of said they had a guilty conscience when purchasing new clothing.
The last few years have been marked by the emergence, or intensification, of practices aimed at limiting the impact of consumption on the planet, such as recycling, buying second-hand items, or upcycling. While the first two are well known to the French, the third (which consists of using objects and materials destined to be thrown away in order to reintroduce them into the consumption cycle, after having given them a new value, a different use, an original purpose in relation to the one they originally had) remains largely unknown today: in 2020, less than one French person in ten was able to give a definition of this practice.
This text provides general information. Statista assumes no liability for the information given being complete or correct. Due to varying update cycles, statistics can display more up-to-date data than referenced in the text.
Published by Statista Research Department, Sep 12, 2022

Turnover of the most valuable clothing retail brands in France 2019 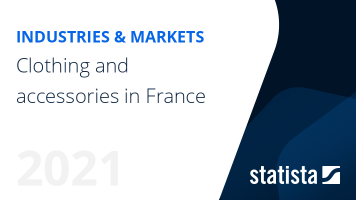 Go to report Clothing and accessories in France
Top Seller

The most important key figures provide you with a compact summary of the topic of "Clothing and accessories in France" and take you straight to the corresponding statistics.